I just use a bellows and focused on something far away like a power pole or star, never did place an aperture in front of the Raynox. Seemed to work OK for me.

I don't think the sensor to tube distance is that critical if you are stacking, since you are moving the in-focus area across the subject one step at time and the critical focus point doesn't matter much as long as you start and stop the stack properly and have a sufficiently small step size.

The helicoid is this one https://www.thorlabs.com/newgrouppage9. ... up_id=3403 which gives 22.6mm of adjustment.
Top

I'm wondering if your extension is so far off that you're staying entirely on one side of focus, and trying to distinguish one level of trash from another.

I wasn't happy that my Raynox 5320 was at exactly the right distance from the sensor so I've just been out shooting the moon to get the focus on infinity. I'm using the same helicoid and tubes.

I ended up with a distance of 198mm from the rear of the lens to the sensor - so there is about 18mm of thread showing on the helicoid, I'm using a Canon 5D.

Here's a gratuitous picture of the moon through the Raynox 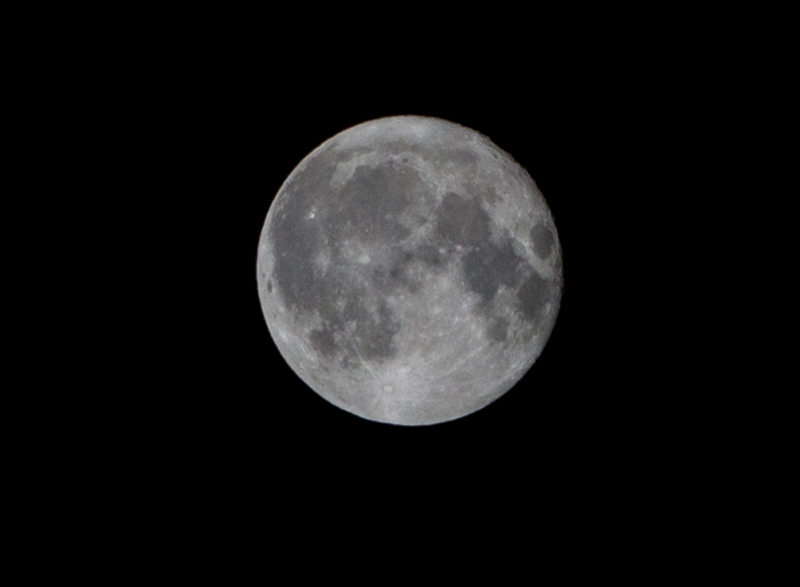 micro_pix wrote:Here's a gratuitous picture of the moon through the Raynox

I think that adds a lot of value to the thread. Is this wide open or stopped to mimic an objective? Can you post a 100% crop also, so we can see what sort of sharpness it gives at pixel level?

rjlittlefield wrote: I think that adds a lot of value to the thread. Is this wide open or stopped to mimic an objective?

I just unscrewed the Nikon objective from the adapter ring - leaving an M25 size hole so it's probably around twice the diameter of the objective glass.

I'll post a 100% crop in the morning . The high ISO, along with the wispy cloud and dust/moisture in the atmosphere must play a role in limiting the resulting quality of the image - my aim was to just get the most in focus image I could. 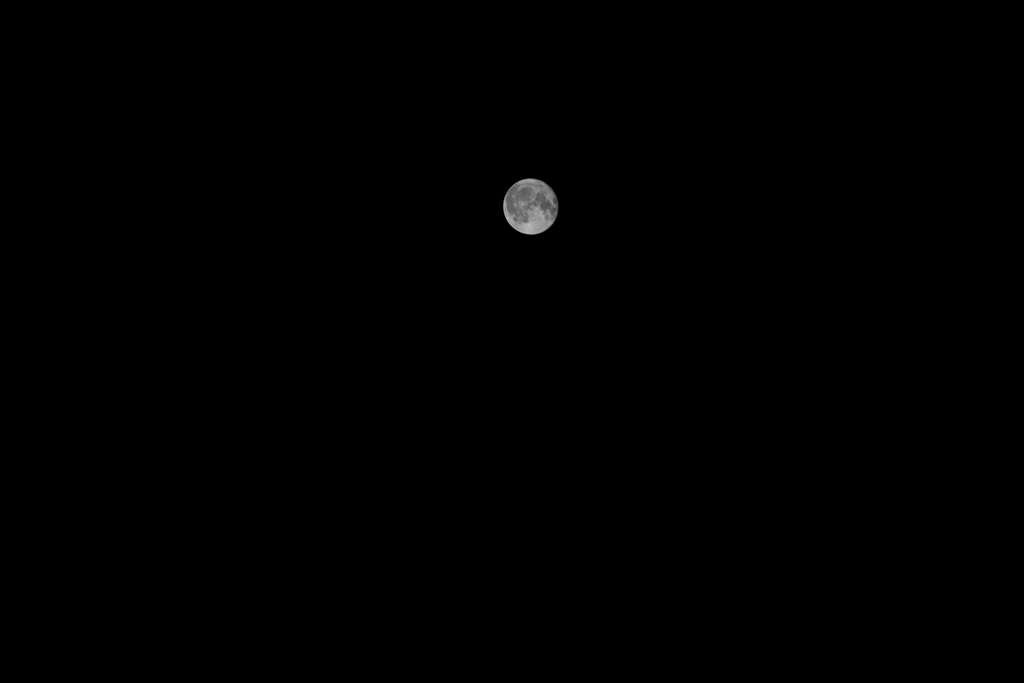 and here is a 100% crop (actually the first image of the moon was a 100% crop as well). I can't say that my search for the best focus was really accurate but it's probably within a mm or so of helicoid movement.

I'll see if the adjustment gets me any better results but I won't be able to test it for a couple of weeks.

I've also used a bellows with the Raynox 150 & 250 which made it easier to set the proper lengths, as you have done with the helicoil.

Lately I've been using the old Nikon 200mm F4 "Q" lens and Vivitar 135mm F3.5 as "tube" lenses because they are easier (shorter) to use in my horizontal setup, but may go back to the extension tubes for a vertical setup since lens creep isn't an issue with extension tubes.

With infinity objectives I was using that lovely Nikon 200mm F4 on bellows then the Raynox 150, I think both were very good. In fact I was getting good results with Nikon finite M Plan objectives on their own. I haven't done any testing but I notice less CA with the Raynox 5320.

I was using a Newport micrometer for manual stacking and wanted to upgrade to an automatic rail system and took the opportunity to make everything a bit more solid using the Thor Labs tubes - mostly to minimise vibration at higher magnification, the Raynox 5320 fits the tubes nicely and others seem to get good results when it's been tested. I'm using the THK KR2001 rail and the MKJZZ adapter + Bluetooth controller.

Yes the Nikon 200mm F4 is a great lens, works well as a tube with the Mitutoyo inf objectives and very inexpensive. I have 2 I got from eBay and had to do the mod so they'll fit on the modern Nikon bodies. One had stuck aperture blades which I fixed & cleaned with Richard Haw's sites help. The old Vivitar (Komine) and Zeiss Zena 135mm F3.5 also work well as tubes with the Mitutoyo's.

I haven't tried the Raynox 5320 though, just the 150 and 250 which I've been happy with. I know Nathan did a comparison test awhile back with a bunch of different tubes lenses, and I recall the 5320 was just slightly better than the 150, so I didn't pursue the 5320.

I found the eBay 52mm screw tubes (28, 14, 7mm) better than the usual 42mm, so that's pretty much what I use for screw tubes now. There are eBay Extender tubes that are bigger in diameter (~60mm) which are good, I use these with special lenses like the Printing Nikkor 105mm. These are more hit or miss as I've had to get 3 sets to get what I needed that was a good secure fit. Wemacro makes a nice lens ring that helps secure a long lens with tubes (or other) and stiffen the assembly, good for horizontal setups. Beatsy has a picture of his Wemacro setup here with the lens ring.


The Thor stuff is always a good choice, that's what I have for my horizontal base and sliding rails. I also have the THK KR20 rails that I use a lot, with Peter's kit (MJKZZ) these make great precision focus rails, especially good for precision high magnifications with virtually no backlash nor wobble. With a custom adapter cable you can operate these directly from the Stackshot controller and use the Zerene user interface. I drilled and tapped a long ARCA base to fit the KR20 which allows using the ARCA clamp system which I prefer. The Wemacro controller also works with the modified KR20 rails, is wireless and works with the Mac OS. An adapter cable is all thats required. I haven't tried Peter's controller though, since I only have Macs available at home, and his system requires a PC, but I'm sure it works as well.

Lots of options to consider!!

I have the 5320 onto a bellows and now it is obvious when the image comes into and out of focus. Distance I have come with at the moment is 192.79 from the sensor to the back of the 5320.

I will run another test when the moon can be seen!

I am wondering though whether the 5320 should be reversed?
Top

The moon made a brief appearance in the Welsh sky last night and I found that it was in focus at 196.5mm from the sensor to the back of the 5320.

Now I am searching for some suitable flocking material for the SM3 tubes. Genbro has this https://www.firstlightoptics.com/telesc ... erial.html but I haven't heard from him as to whether it is recommended or not.

There is an interesting test of similar materials here https://www.cloudynights.com/articles/c ... uction-r82

with the best results coming from baffles. Nathan has 3D printed his own.

I also need to make a lens hood for the Mitty 10x! It never ends.
Top

I used the First Light Optics flocking. Just cut it to size, took off the backing paper and rolled it in to a tube.

The big down side is that the flocking particles are easily shed from the surface like a black dust. Before I cut it to shape I used sticky tape to remove as much loose stuff as possible but I think I’ll be needing to clean the sensor on the camera more often.

Protostar is another source for flocking material, it has a sticky backside also. Another material that was reported here is something called Beetle Black card stock.


Edit: Andy I see you have already found this link.

I don't think that either Protostar or Beetle Black are available in or from the the UK easily.
Top
Post Reply Previous topicNext topic
36 posts