pulsar123 wrote:If there is a way to trigger flash from inside Magic Lantern (which I am not sure of), one could simply introduce a flash delay constant into ML.

There is no way for them to trigger flash in ML. The only thing it can do is disable live view to enable the flash to work, which most canon cameras have as an option anyways. (Silent mode- disabled for live view settings)

rjlittlefield wrote: The issue has come up before, of variable timing when using an external trigger to flash during a long exposure started by electronic shutter. Ah yes, here it is, documented as Canon T1i: EFSC has large variation in shutter delay. On a quick re-read, it looks like I had to use a long shutter-open time also, due to unavoidable variations in shutter timing with respect to the shutter trigger pulse.

The a7rII* does have flash with EFCS, as well as the d810. You can even see that it matches the camera sync speed just a hair better than with out EFCS on both cameras http://blog.kasson.com/?p=12012

I do believe the reason canon does not is atleast a little bit arbitrary. In my testing of live view, the variation on my camera was specifically in the camera triggering the shutter.

The series of events as I could test was:
-Shutter release pulse for X ms
-Pulse may or may not get detected
-If detected, Shutter fires

The required pulse length, I believe corresponds to the delay in the shutter firing. If I set the pulse size for triggering the shutter to say, 70ms, the camera will only trigger maybe 30% of the time(made up number here btw, I dont have the actual stats at hand). If I put the pulse size up to 450ms, its fire rate will be at 100%.

So what does this have to do with flash? Well, I would not imagine that the flash gets fired from a shutter button/release signal directly, but rather by the process that those signals trigger. So there should be no timing issues at all for firing a flash in EFCS even with the delays that Rik and I have both seen in actually getting the camera to trigger.

So I guess my point is, I have no idea why canon still wont let us fire the flash with EFCS on. Lack of interest in developing the feature is my only guess.

*Note, I briefly had this camera and it worked well with EFCS, but I returned it because it was not well suited for use on bellows due to the mount. If some one wants to know more I can make a separate post.
-Steven
Flickr Macro Rig Control Software
Top

I spent a few more hours experimenting with electronic shutter with Magic Lantern and my Arduino macro rail, with the following observations:

- Even thought using 1/5 s exposure is quite reliable, 1/4s still seems to be the best choice (with my Canon 50D): once I reformatted my fast card, Lexar 1000x 32GB, I can now run 300-shots stacks using FRSP without a single black frame.
- First I thought I could reliably shorten the time between shots from 6s to 3.5s - I took 500 shots stack, and all frames looks okay according to the camera's preview - but when I put the card into my PC, I discovered that only first 60 shots were actually recorded. So apparently taking silent pictures too frequently crashes the camera. I did a few more tests, and converged to 5.5s between shots as being very reliable. (These are two delays in my rail: after moving to the next shot position, the rail waits for 4s, then a FRSP+flash is initiated, and after 1.5s the rail moves again.)
- I tested the impact on FRSP stacking of noise reduction being on/off (no impact), and the length of the time the half-press needs to be engaged after the flash goes off (was 1s originally, but works perfectly fine with 0.1s, so no real impact).

Here are my ultimate timings I'll be using with my Canon 50D for electronic shutter stacking:

Including rail movements, the timings are as follows:


I already made a cone light diffuser for my new Nikon M Plan 10x/0.25 objective, so hopefully today I can put FRSP to work 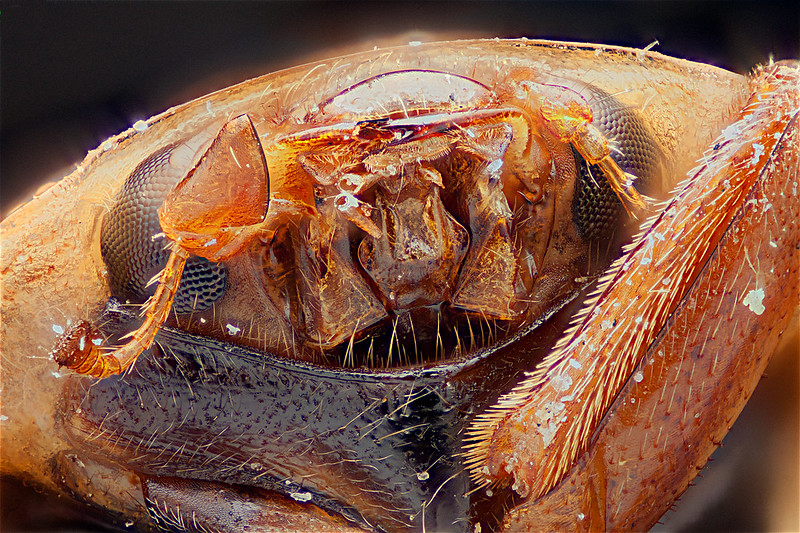 It worked pretty well (I'll have to increase the exposure a bit as I did get a few black frames - one every 50 or so). Something like 0.4-0.5s exposure should fix that.
Top
Post Reply Previous topicNext topic
33 posts