How can I harvest and adapt a focus block?

A problem with "bonding the back of the casting" is that the back is usually not flat, and/or not particularly parallel with the line of focus movement. That's true of the Olympus CH2, one of the cheapest good focus mechanisms.
Two methods suggest themselves to me. One would be to use a filler material such as epoxy resin to bond to a plate. That requires holding everything flat and parallel while it sets.
The second would be to drill two holes right through the block and drop it into a U section of aluminium. Looking at a CH, I don't think it would be difficult to avoid swarf from the drilling, entering the mechanism. Once you have threaded rods passing right through the casting, adjusting in the U section is straightforward. The microscope casting could be clamped with nuts & washers on the rod. Nothing is likely to be flat where you want it, as these BHC stand pictures show. Original shots by Chris S. .

The part where the ruler is, looks flat: 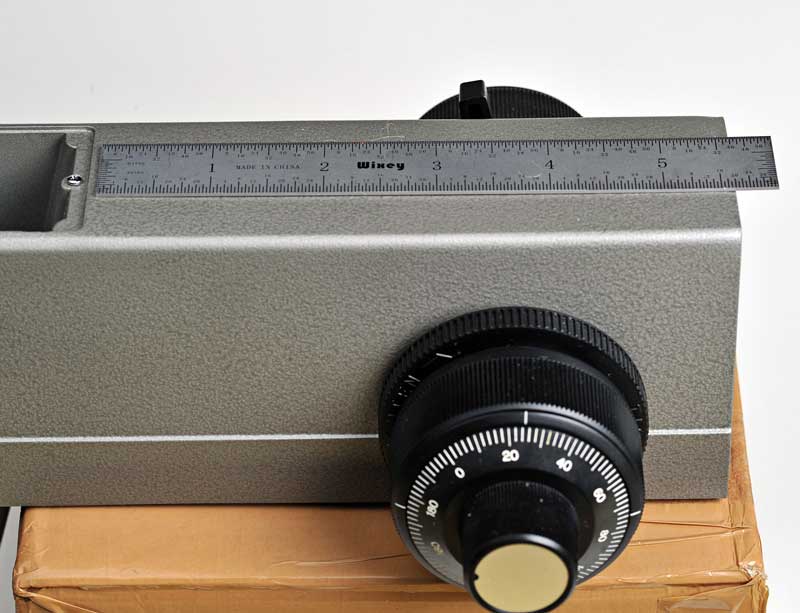 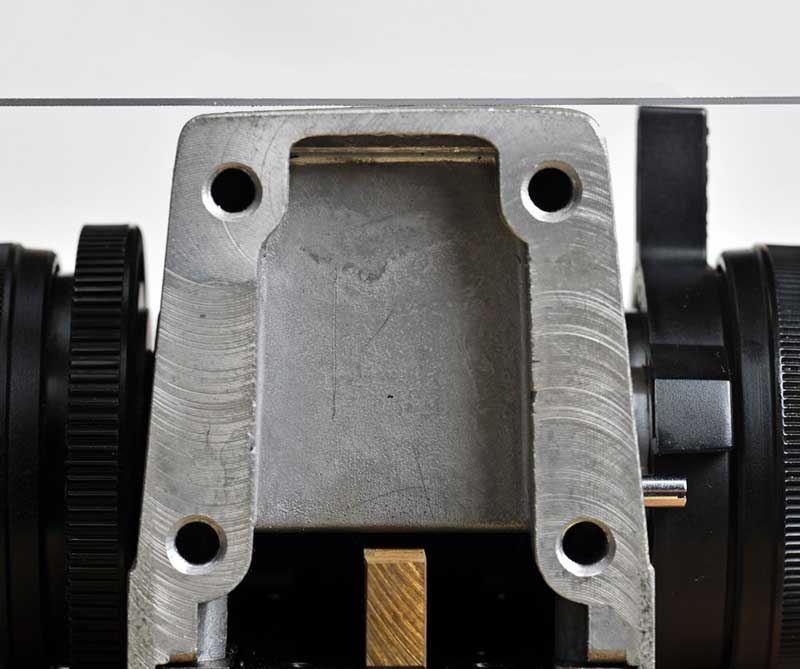 rjlittlefield wrote: The issue about mechanical stability is not so clearcut. What microscopes are designed to do is maintain micron-level stability between the stage and the objective turret. As soon as somebody breaks that particular connection, say by mounting the camera on a copy stand and looking downward onto a stage extension or a harvested base and stage, then they're back to the problem of having a long chain of mechanical links between the subject and the lens.

Well yes. I have always been puzzled by such designs. No real reason for them but extreme flexability with the optics. Mostly the need is due to mounting via the camera base. Fix a mount to a section of M42 tubing (or perhaps a quality bellows) and bolt to microscope structure. You can extend both up and/or down to keep close to parafocal. The best options for tube lenses can use a bit of M42 as can finite objectives and most quality reversed enlarger lens solutions.

It depends what the rig is for. Some here are for experimenting with a wide range of optics but if one is happy with, say a set of mitutoyos and a reversed 50mm enlarger lens then there is not a lot point to a copy stand.
Top

steveminchington wrote:Not to worry - if you don't want to disassemble the mechanism I would suggest you bond the casting onto the base plate with this:

Thanks for this alternate suggestion, and especially for giving such a specific link.

I don't mind confessing that most of my personal experiences with off-the-shelf epoxy have been, um, "less than completely satisfying" in the long run. With clear stuff, I often see gradual silvering (delaminating) at the glue joint, and after a while (often years) the joint will come apart. Epoxy that's not clear comes apart too, but I don't get so much warning. I assume that all these failures are due entirely to my own incompetence at selecting and using materials that are available at nearby stores. Nonetheless I assume that other people might have similar problems, so I don't often recommend it. I would be especially nervous for something like this application that might at some point be placed into a vertical setup with a few thousand dollars of camera and lens depending on it.

Still, this particular epoxy is one that I've not used before. I notice that it comes from a reliable manufacturer and the website currently says "Recommended for repairing machinery, appliances, tools, lawnmowers, automotive components, pipes, and embedding bolts and screws into metal". The website also lists it as a "Specialty" product, but says that it's available at one store only 10 minutes away. This sounds very encouraging.

I scurried out this afternoon to get some. In the spirit of scientific investigation, I checked several other stores along the way. Turns out, it was not available at 3 out of 3 hardware stores (Ace, Harbor Freight Tools, or Home Depot), although two of those stores had lots of other Loctite products. At the recommended store (Walmart!), I eventually found a shelf label for it, but no material. At a 5th store (Fred Meyer), I finally got lucky, finding not just one but actually several packages on the shelf. I find this both amusing and puzzling: 3 out of 3 hardware stores don't carry this "specialty" adhesive, but a couple of general retailers do.

Anyway, I've now cut into pieces a sample of aluminum rod and I'm seeing what happens when I butt-joint them back together, following recommendations on the package to "leave a reinforcing fillet or splint". It's a stringent test; I have the highest of hopes. [2/26/2015: the results are in.]


If I were doing the job, I would take the focus mechanism out and service it as any hardened bits of grease can cause problems with stiffness and irregularities in the movement, but then I like doing things like that!

I know how that goes. I had great fun getting that CH's thoroughly hardened XY stage positioners to work again, after I finally tracked down a 0.9 mm Allen wrench that was needed to get one of the retaining screws out. I like machining stuff, too.

But along the way I've messed up enough jobs to have developed some sensitivity about things that can go wrong.*

So I've also come to appreciate the value of reading other people's notes and suggestions, and that's what I'm hoping to collect in this thread.

*See HERE for one example involving a bearing that gradually seized up after oiling.(?!)

rjlittlefield wrote: I don't mind confessing that most of my personal experiences with off-the-shelf epoxy have been, um, "less than completely satisfying" in the long run.

I've never had a problem with specifying Loctite products over the years. They are widely used in the automotive and aerospace industries. Engineering adhesives are commonplace in mission critical applications for example the bonding of friction material to a steel plate as in vehicle disc brake pads.


ChrisR wrote: A problem with "bonding the back of the casting" is that the back is usually not flat, and/or not particularly parallel with the line of focus movement.

This is not a problem as epoxy will gap fill as you suggest. As for alignment, this is a common situation with for example, aligning an electric motor shaft for direct coupling. This is overcome by using shims under the mounting feet or by using jacking screws. In the case of the mounting base plate, having a tapped hole in each corner will allow it to be leveled with adjusting screws before tightening the holding down screws.

Good luck with the distruction test Rik! One company I worked for as a development engineer, we had a metallurgy lab in our department which did destruction testing of welded joints and inspected them under a microscope.
Top

It matters not which epoxy you use, as long as there is paint on the surface, the bond will only be as strong as the paint's adherence to the primer / metal.
Gaps aren't the problem with an epoxy like araldite metal, it's surface prep.
I am not young enough to know everything.
Top

Choronzon wrote:It matters not which epoxy you use, as long as there is paint on the surface, the bond will only be as strong as the paint's adherence to the primer / metal.
Gaps aren't the problem with an epoxy like araldite metal, it's surface prep.

I totally agree with the second part, but in the case where the metal is painted with epoxy powder coat which is baked on at high temperature, the bond is likely to be as strong as the epoxy joint. I have experience of trying to remove it which can be done either chemically with dichloromethane or mechanically with abrasives, both of which are highly likely to contaminate the focus mechanism.
As for the epoxy, I would only use a product from a manufacturer that could back up their claims about mechanical strength / longevity etc.
I guess you have to ask the question "what would be the result of a catastrophic failure of the joint"? In the case of a horizontal set up - a sudden lack of movement. In a vertical set up, your camera and lens could hit the deck but you could put a safety strap round the camera if you were that concerned.
Top

I harvested a nice focus block from an old Zeiss Invertoscope over in this thread: Homebrew Stacking Controller. The machining was done with basic woodshop tools and hand tools. The post and pictures probably descibe the process better than I could in-line here. I just disassembled the block completely which avoided getting bits in the gears. Also, I am using JB-Weld epoxy to fasten the gear to the focus knob which has held up so far, though it is not weight supporting for the whole mechanism so there would be no catastrophy if it broke off. I did sand the end of the focus knob first - overall I'm more worried about the plastic side of the bond.
Top

It's been some time since I mentioned that I would post them, but here is a basic idea of how I utilized a 3D printer to adapter a focus block to my specifications;

I used Autodesk Inventor (student license) to to design the pieces- even with a steep learning curve, as I haven't utilized any type of CAD program in many years, it took me less than a couple hours total for all three of the pieces used currently in my setup.

I used this peace as the back plate- four holes on the outer for attachment to block, and varying holes at center for attaching to the post mount 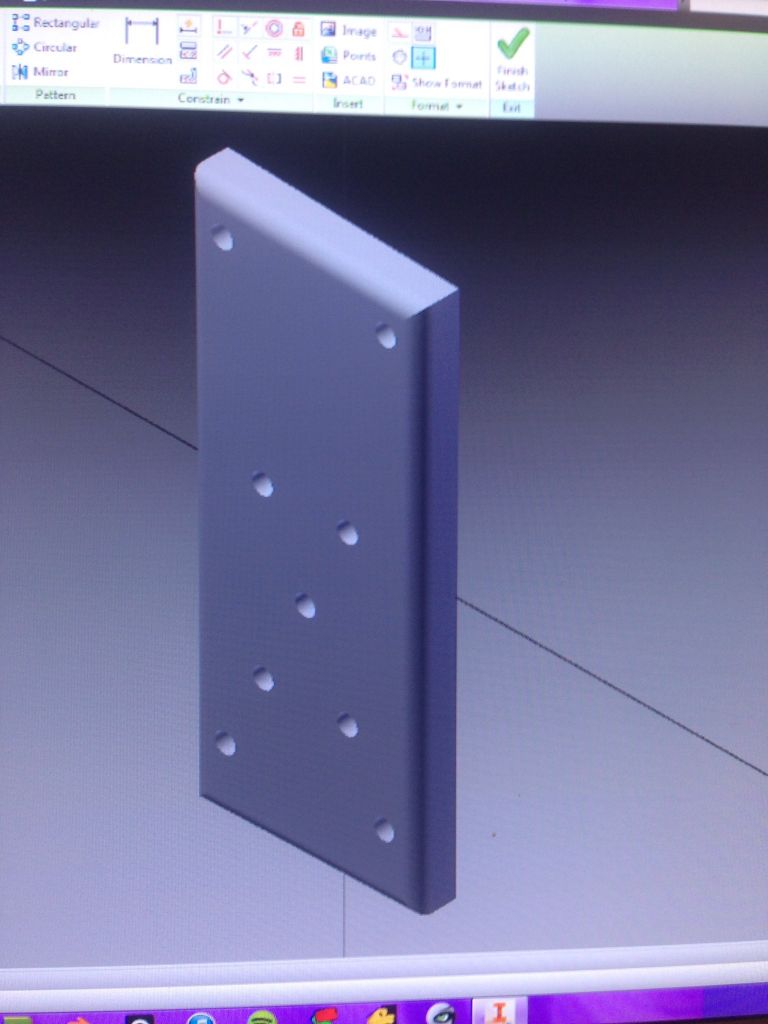 This is the back plate at work 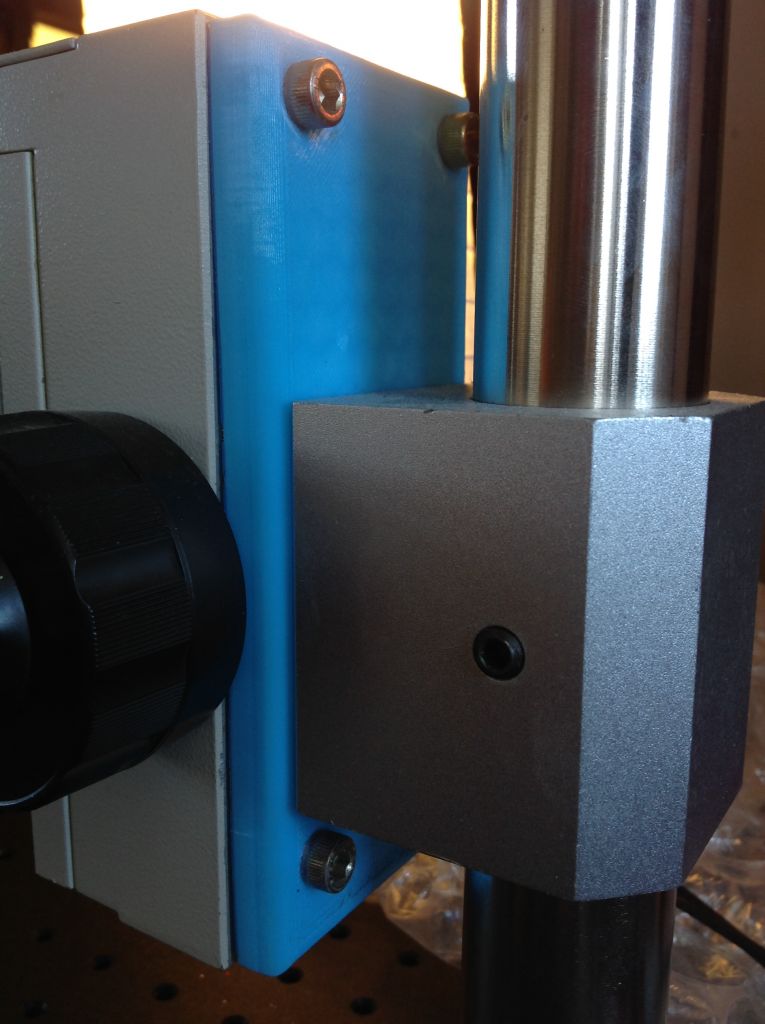 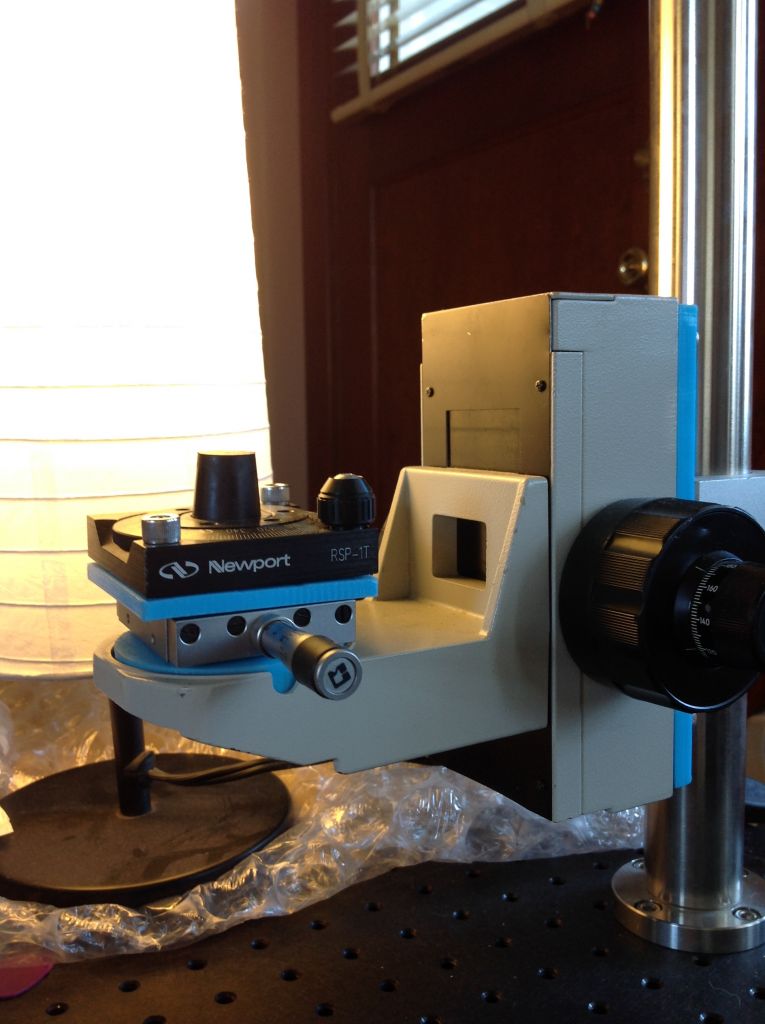 Now since I am attempting to build an as-automated-as-possible 3D macrophotography rig, I've designed this pan/tilt piece using Autodesk Inventor. It's my first go, so I'm not expecting anything brilliant, but I am mounting two NEMA 17 steppers, straight from Cognisys, whereas each hole will be where a motor sits- one to drive the rotational axis, and one to drive the tilt axis. I will eventually post finished results to the forums, but I believe this gives a fair idea of how useful 3D printing may be for the kind of macro work done here on the forums, especially with DIY enthusiasts who need specifications not regularly provided elsewhere. 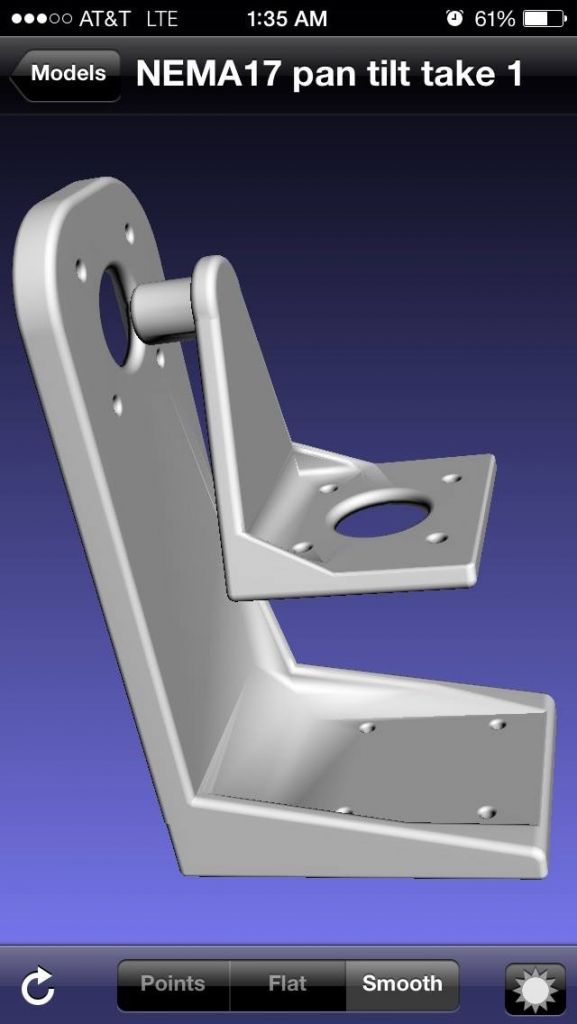 I hope I am able to inspire others to set out on their own 3D printing endeavors. Even though I have an acquaintance only a few miles from me who owns a printer, I would like to mention that there are more than a few places online that will accept, print, and ship a 3D model to your door (of your design, of course) and I'm sure we'll be seeing more structurally-fortified choices (other than the plastic I use, though it does the job well for my applications) in the future.