I found this tiny moth in the garden, looked interesting but was hard to tell until I got it under lights and a lens.

Well it turns out it's a little beauty, I'll certainly be taking more interest in tiny moths after finding this gem!

Apologies for the background, this is just a quick and dirty whole body stack for any ID help 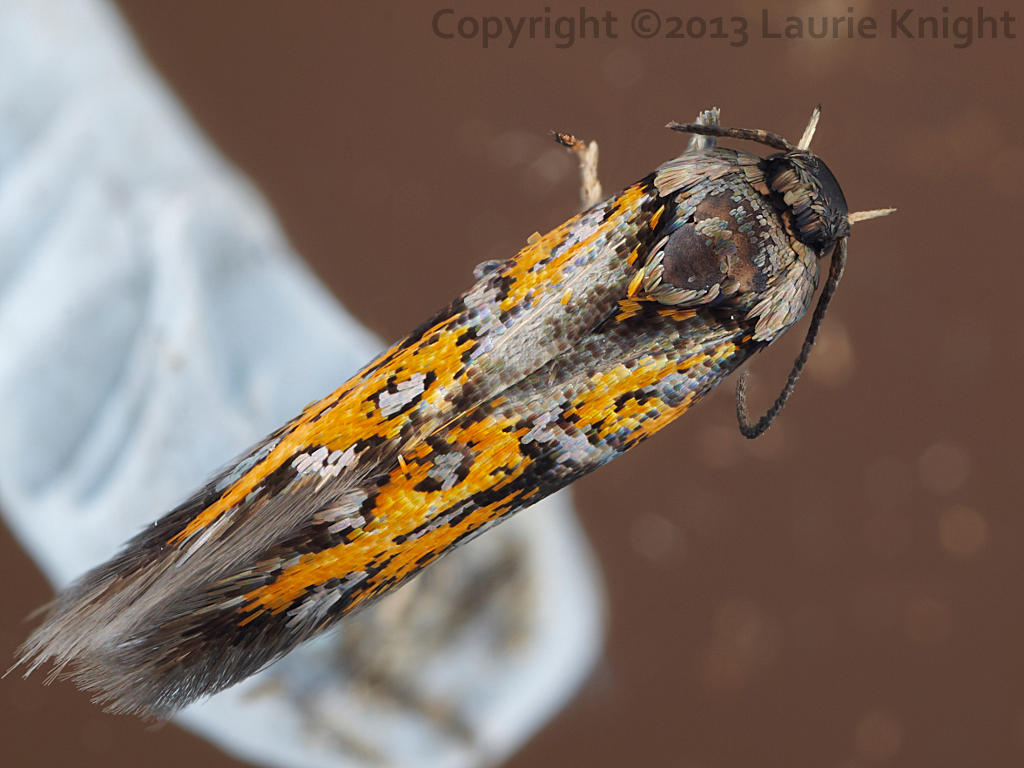 It has some very cool iridescence going on in those scales that appear silver/white. Light coming from certain angles makes them light up electric red/blue/purple to the naked eye. It's very difficult to capture on sensor though. 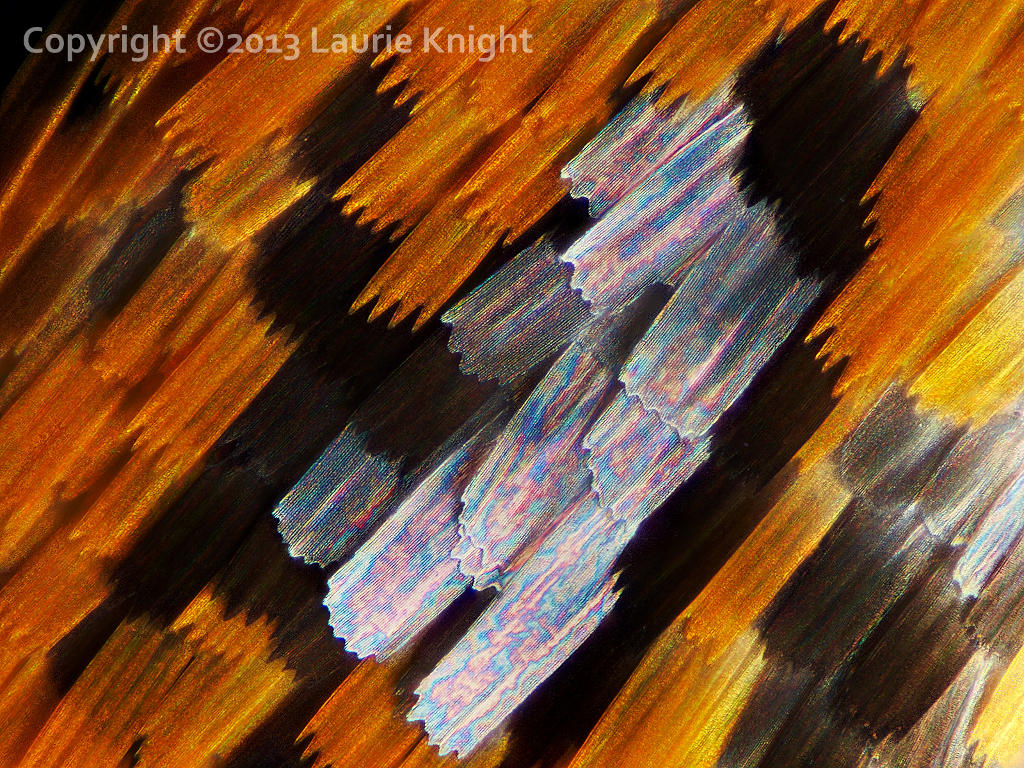 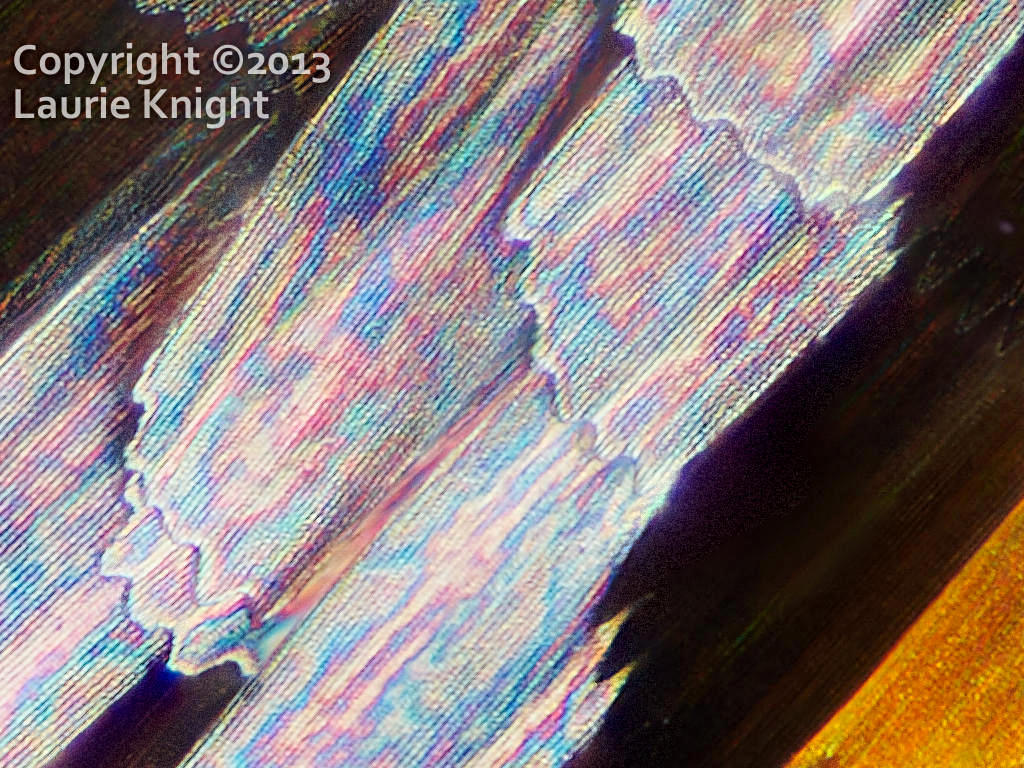 And finally one more close up 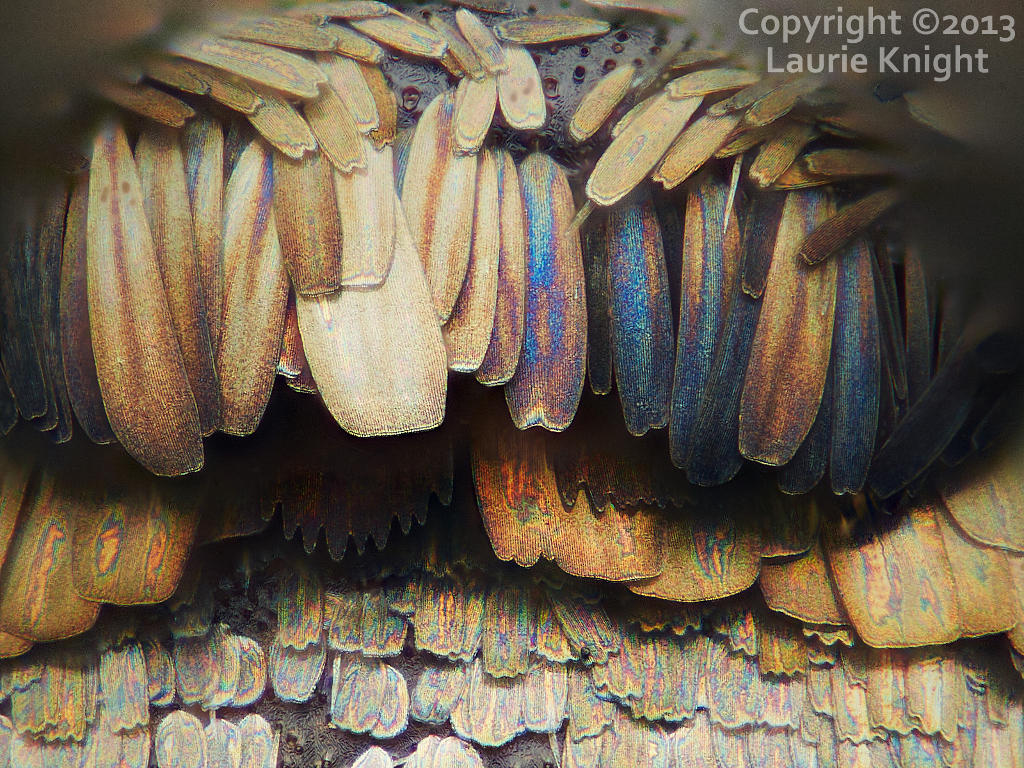 Worth mentioning this last one was my first attempt at using Slabberjockey. I think I must have mucked something up in the setup as I'm sure it was doing alignments for each sub-stack, anyway it took quite a long time, but it did all work in the end. I took the opportunity of doing some noise reduction in the intermediate slabs before combining them into the final output.
Flickr | www.laurieknight.net | Blog
Top

Very nice images.
I can't help with an ID but just wish to comment that many of the micro-moths rival birds and butterflies for their colours. Many are tiny, <10mm), and make excellent subjects for macro.
Many are attracted to lights at night, they can be collected and photographed next day and then released.
A white black-light, which gives off light in the UV end of the spectrum, is especially attractive. A single 30 watt fluorescent tube, in NA they have a BL designation, is perhaps the easiest and cheapest. Simply fit it into a regular fluorescent lamp holder.
I am keeping busy with my local micros, such as this beauty:

http://birdingnewbrunswick.ca/group/mot ... ttle-micro
NU.
student of entomology
Quote – Holmes on ‘Entomology’
” I suppose you are an entomologist ? “
” Not quite so ambitious as that, sir. I should like to put my eyes on the individual entitled to that name.
No man can be truly called an entomologist,
sir; the subject is too vast for any single human intelligence to grasp.”
Oliver Wendell Holmes, Sr
The Poet at the Breakfast Table.

Beautiful little moth. I especially like the color details in the whitish scales.


Worth mentioning this last one was my first attempt at using Slabberjockey. I think I must have mucked something up in the setup as I'm sure it was doing alignments for each sub-stack, anyway it took quite a long time, but it did all work in the end.

Realignment on each substack will happen if you point Slabberjockey at a directory of images. Point it at a saved Zerene Stacker project to avoid this. Safest is to do an Align All Frames before saving the project, then run Slabberjockey against the already aligned project.

Many thanks guys for the kind words and comments.

NU, it's funny I've been meaning to ask you about moth traps for a while. I understand the general gist is to have a bright light which attracts the moths, but what's the 'structure' of the thing which 'retains' the moths? I've never seen one in use so I have no idea how they are put together. I have a couple of pretty bright torches so was considering making a (very amateur) trap of some kind using one of those.
Flickr | www.laurieknight.net | Blog
Top

Laurie,
The basic requirement is a lamp that gives off UV usually termed a Black-light. These can be either with a black glass tube which makes it difficult for humans to see the light or to see the moths. These lamps are neat in that white clothing positively glows.
The other Black-light bulbs have white or clear class and give off a lot of light visible to us as well as UV. This is the lamp I would suggest.
You don't really need a trap. Simply position the lamp in front of a white sheet and collect the moths, and other insects, in small glass or plastic vials - one per vial. I am currently running a 22 watt white glass black-light next to the white siding of my house. Already tonight, 11.30 pm, I have enough moths to keep me busy photographing for most of tomorrow.
If you really need a trap you can see some designs on ALS (in the UK) and BioQuip (USA). Prices are horrendous. Make your own! The only must-have is a UV-emitting lamp, anywhere from 10-40 watts is sufficient.
http://www.angleps.com/mothtraps.php
http://www.bioquip.com/search/DispProduct.asp?pid=2810
NU.
student of entomology
Quote – Holmes on ‘Entomology’
” I suppose you are an entomologist ? “
” Not quite so ambitious as that, sir. I should like to put my eyes on the individual entitled to that name.
No man can be truly called an entomologist,
sir; the subject is too vast for any single human intelligence to grasp.”
Oliver Wendell Holmes, Sr
The Poet at the Breakfast Table.

I've made a couple of mothtraps, a skinner and a robinson, one of which I still use irregularly and has served me for 10 years now. The basic principle that keeps the moths in is akin to a lobster trap - an opening that they fly through by being attracted to light perched on top, but they have difficulty flying back out of. Not because of a physical limitation, but more because the behavioral tendency, once inside, is to stay there, under the egg cartons that are usually placed inside. They seem to get hypnotized by the light and don't want to move.

You can use any of various bulbs that give off UV including blacklight although I've personally found it to be more convenient to use a "self-ballasted" blended MV bulb. Otherwise you need to add a ballast box into the circuit which is a bit of a chore. Not sure how important this is anymore because it looks as if just self ballasted are sold now, maybe check with ALS to see what the state of play is. Actinic tubes or bulbs also work but my experience is you only get about 10% of the catch that you do with MV, they're a bit crap. Different species though. Fwiw, I used a wickes pond tub to make the robinson trap container, they still seem to make 'em.

The advantage of these traps is that you can set them and forget them for the night. I have mine on a timer so I time it that it comes on 30 mins before dusk and goes off at dawn. Then I collect at leisure once I'm up. The longer you leave that the greater the number that tend to fly back out though or get eaten if you have hungry robins or blue tits. Also you don't run these every night otherwise you just end up catching the same guys, I usually run it once a week at most.

As NU says, if you have the right bulb then just hanging up a white sheet will get you plenty to choose from. But obviously you'll need to be out and about looking for them late at night whereas a trap will let you just tootle along at your leisure next morning as they don't fly out.

Micros are definitely interesting to photograph although being so small it's quite a pernickity exercise. It's something I do mean to get back to sometime -- this was one of my first efforts at stacking which went ok at thew time: The New Hairdo by Johan J.Ingles-Le Nobel, on Flickr
My extreme-macro.co.uk site, a learning site. Your comments and input there would be gratefully appreciated.
Top
Post Reply
6 posts • Page 1 of 1