For several days I have been trying to photograph an Aeshna cyanea which lives along the brook at the bottom of my garden. Its behavour towards me, together with observations by Brian Valentine, shows it to be curious and fairly unfazed by human presence close to it.

So, when I saw what appeared to be it at the opposite end of my garden, next to the garage, I felt quite bold in approaching it. Even so, it was about 7 feet/2m above the ground. So, for my first attempt I attached my Tamron SP 180mm 2.5 LD 35th Anniversary Edition lens, plus the x 1.4 teleconverter, to my E-P2 and selected f8, 1/160 ISO 800. Effectively, this was an apochromat combination.

This was the best of three shots before an attempt to get closer scared it off. The head is not as sharp as I hoped, due to the lens being aimed upwards at an angle. Anyway the patterning and male genitalia show well.

Cropped by about 20% for format. 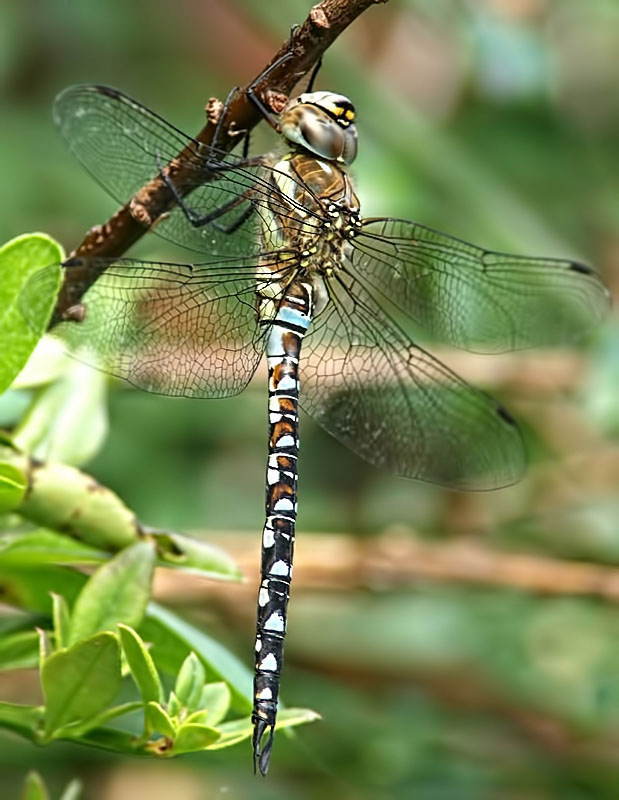 A bit later, the dragonfly returned. This time, further emboldened by knowing how approachable this species was, I stood on an old kick-stool and got close, using my Elmarit 90mm with a Marumi +3 in front, settings as above. 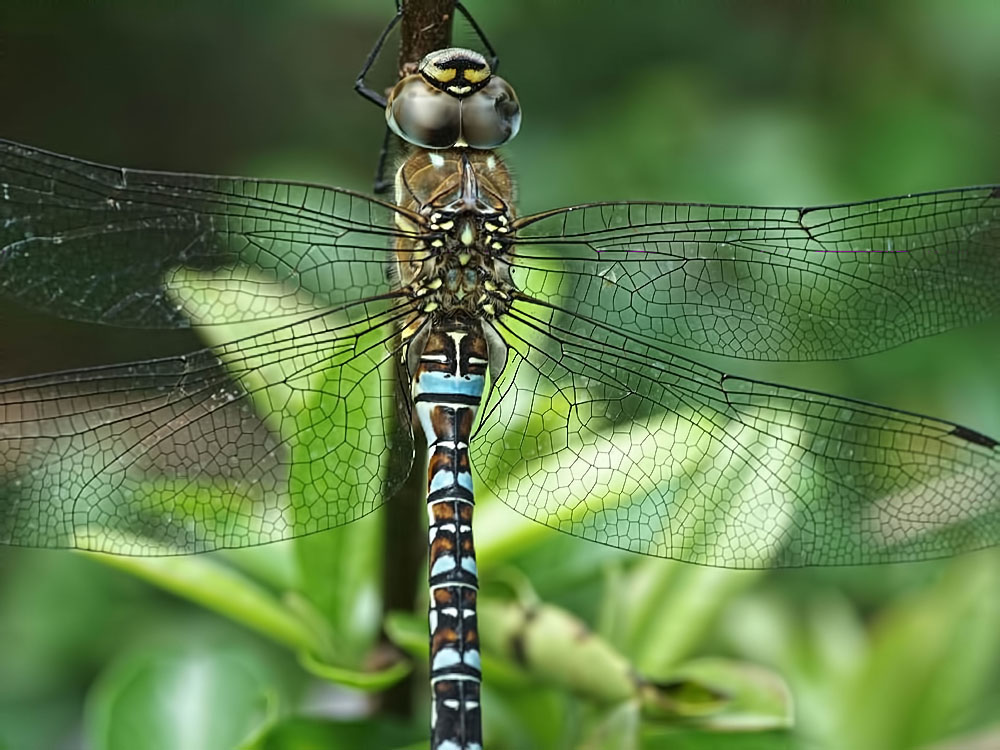 Having at last photographed this species, I examined the images. It was an Aeshna all right, but not cyanea.

The anterior thorax, dorsally, looking like two shiny (an illusion from two yellow markings forming 'highlights') brown eyes, the dagger-like marking pointing at the broad blue band on abdomen one, show it to be a male of A. mixta, the Migrant Hawker.

I recently saw, in the same part of my garden, a brownish female which might be of that species.

I am lucky to see this species, as I live near its northern limit. It seems that large numbers of them frequent the edges of woods a tree-lined lanes at this time of the year.

So, unwarranted boldness got the result!

That leaves me with A.cyanea still on my 'to do' list.

I suppose there are plenty of facets to permit normal function.

According to Dijkstra, in Field Guide to Dragonflies of Britain and Europe, the blue colour of the male turns violtet oin cool weather.

For shots of another male, through a macro lens see:

Harold
My images are a medium for sharing some of my experiences: they are not me.
Top
Post Reply Previous topicNext topic
5 posts • Page 1 of 1