I have followed with great interest your explanations. Especially the drawings of Rik, because I do not speak good English, French and optics

I know very well the system that explains Rik. I think his name is AFOCAL, and is the appropriate method for shooting with bird watching telescopes with non-removable lens cameras. I wrote an article about it more than 20 years ago, with the beginning of compact cameras, and most recently, I wrote a blog post to photograph with binoculars and cheap cameras. And I did with my first microfotos that system.

And this is a image taken with my Canon G11 with this metod. 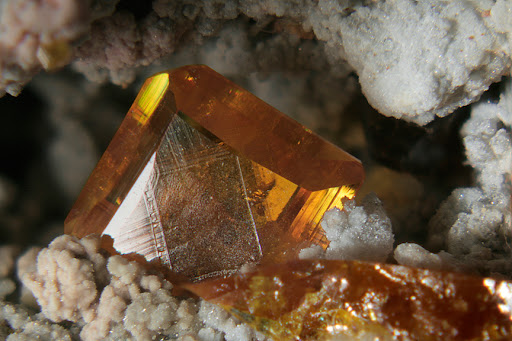 But I found two problems:
First: the exit pupil (the cylinder diameter of rays exiting the lens after Componon) must be bigger than the entrance pupil of the objective lens of camera, and if it is smaller, produces a strong (focused) vignetting, which is the circle of picture I got.

and two: In the scheme of Frederic, he uses a Lumix GF5. Placing the focus point at infinity is the right system, but Frederic places a Raynox front of the lens (at the end, a Raynox is a converging lens) and is impossible to get the compact camera + Raynox focused at infinity. That's why my ray tracing scheme seems so complicated.

Well, I´m learning english and optics. I have luck!

Michael, thank you for the setup and images posted on the previous page, "Setup of Ploum" thread, HERE.

I wrote a reply about the e > f1+f2 issue, but it got too long to post here so I put it in a separate thread of its own. You might find that interesting reading.

The images of your resolution chart illustrate nicely my complaint that the objective has been "dragged away from its design point". When you force an objective to work at anything other than its designed focus point, you introduce spherical aberration. This essentially forms the image with a mixture of focused and unfocused light. The unfocused light is what makes those halos around the bright lines. Your images are a particularly dramatic illustration of this effect.

The effect of spherical aberration increases sharply with NA, something like NA^4. This explains why one can get away with a lot of focus tricks at low magnification but not at high.

i do completely agree - the problem with Frederics setup is, that you cannot make m2 small if you want large magnification m AND reasonable step sizes for the stacking procedure. Large values of m2 requires the MTTY to be operated far from m2=0 - the point it has been designed for.

So: no solution for high mag work (at least with the optics i own)

If people are interested i have manufacture for clone of mitutoyo.

A new BW will coming but i have find good product for example :

ploum wrote:If people are interested i have manufacture for clone of mitutoyo . . . for example :

I advise proceeding very cautiously in such a situation. One maker of such lenses lent me several specimens for testing. Sorry to say, they were dreadfully bad. Your luck may be better--I hope it is--but I'd recommend scrupulous testing.

. For moment BW 2x and BW 20x works like previous.

5x test comes in next weeks.

If I knew, I have forgotten - what is BW?

BW is name of my manufacture in China.... I have 2 objectives and i have order an other....

BW Optics, to be precise.
Top

Ah, I don't remember anyone mentioning them.
These, then:
http://www.bwoptics.com/proend.asp?id=92
Top

In my first contribution to this thread is gave some formulas that describe a lens combo if the distance between the two stages is smaller than the sum of the focal lengths. I consider these still to be correct.

In the analysis given i assumed however that the second stage taken alone produces a real image with magnification m2. This is however not the case with frederics setup as i learned yesterday, as Frederic uses a distance of only b0 = 8 cm between the raynox lens - which is supposed to have a focal length of approx f2 = 210 mm - and the sensor. So the raynox alone is not possible to produce the required real image on the sensor surface. If i set

This expression will only vanish if b0=f2, that is, if the second stage is focussed to infinity.

So lets do some examples, sticking to Frederics values b0 = 80mm and f2 = 210 mm. I assume f1 = 10 mm corresponding to a 20x microscope objective designed for a 20x tube lens and neglect the effect of the added „tube lens“ on the total focal length of the microscope objective - tube lens combo (the first stage) employed by Frederic. With e = 50 mm, 100 mm, 150 mm i then obtain the magnifications

the change of magnification with e is

independent of e. Again total magnification changes considerably with e. If we look at the shift of the object plane with e we get for the different values of e considered above for the focal length of the combo

Shifting the camera by 100 mm thus causes a shift of the object plane by a little more than 200 um.
So the „optical lever“ is still very high - but could be useful.

I regained interest in the method and i’m very curious to find out how my optics perform in the modified configuration. I will report my findings as soon as possible (it will probably take a few days due to other obligations).
Top

For moment just said than fox x40 dw/de is to small with my system.

ploum, let me offer a suggestion...

If you want people to understand your setup, then post a photograph of it.

Shoot the photo from the side or from the top. Be sure that all the lenses can be seen. Put a ruler next to the lenses, so that we can see where things are placed.

This photograph should be simple to make, and it will clear up a lot of confusion.

tube lens is Inside

all is easy with that