...what a comfortable place, it would be to die in.

...what a comfortable place, it would be to die in.

“What a comfortable place it would be to die in,” were the prophetic words written by Elisha Mitchell, in a letter to his wife on July 14, 1844. Little did the professor know of that tragic fate which lay before him.

The trails that run through the Black Mountains have been there for well over 100 yrs. Improvements have been made to them over the years of course and they are not anything like the strenuous and rugged trails that the explorers, scientists, and excursionist trekked those many years ago. Though most of them are or could still be the original trails traveled by those who settled in this mountainous region. 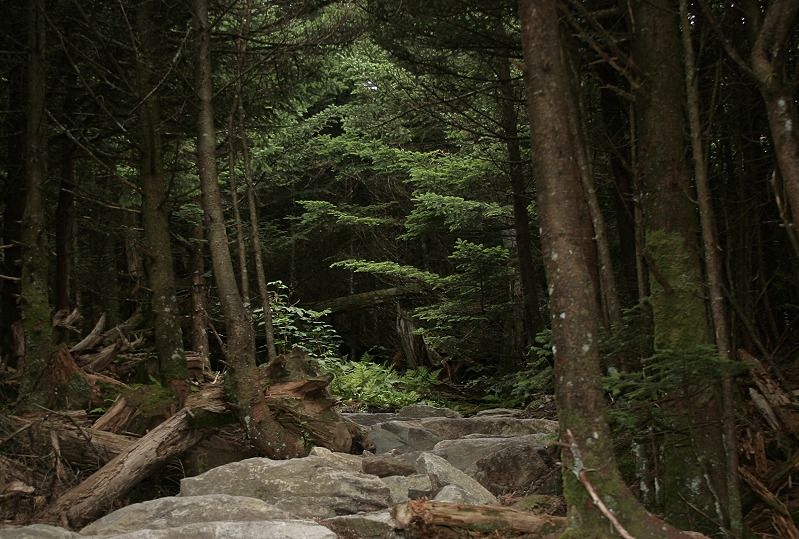 That which you see shown above is the High Balsam trail to Deep Gap. Though looking rather strenuous in this photograph, the trail is actually most accommodating and probably nothing like it was some one hundred years ago, when Elisha Mitchell and others traveled it to the summit of what is now Mount Mitchell. The large stones you see are the stair steps that I mentioned in a previous post, these were set in place probably, by the use of hand winches, that are used by modern trail builders.

It was quite foggy or cloudy, I should say, upon my arrival at the mountain this morning (August 16th, 2008) and the temperatures were already in the lower 60 degree F. range. I grabbed my usual cup of coffee from the concession and took my time in getting ready for my ascent to Mount Craig, this time having my wide angle lens with me and my Canon G7 point and shoot for a back up. I also found it quite hard to concentrate on scenic images with so much at hand for photomacrography.

One other thing burned deep in my mind this morning as I prepared for my much awaited return hike and that was the report of a small boy having been attacked by a bear in the recent week, here in North Carolina, in the Pisgah National forest. Bear encounters are rare here but they do occur and usually when least expected in this region. Since the year 2000 there have been fifteen “reported” black bear attacks or encounters, recorded in the Eastern United States. 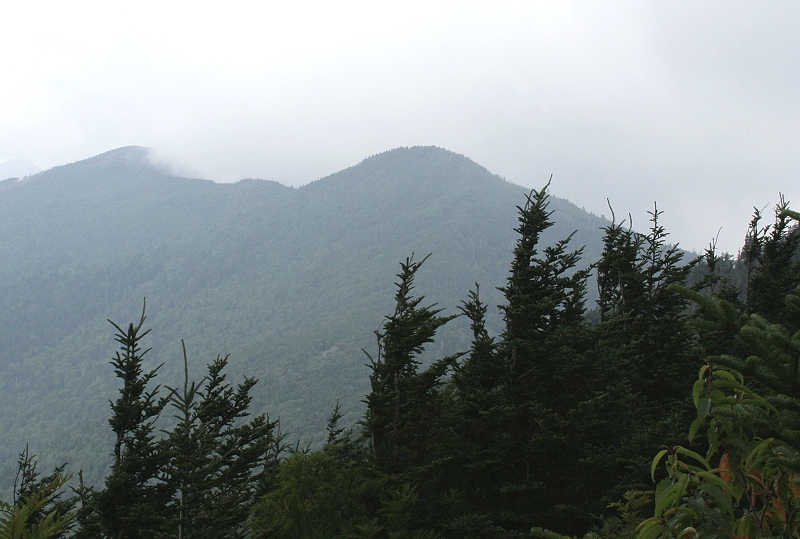 It is a rather cool and heavily overcast morning and the Black Mountains during the times of weather as you see here, is quite enjoyable and to my liking. The low clouds moving along the range and over the tops of the peaks are being pushed by a cool, almost cold wind, and they blanket the forest in a gray misty shroud, the quietness of it all is overwhelming. It is in this quietness that even the birds cease to sing and the oppressive silence can be almost felt, seemingly as though it was or is a burden.

It is not hard for one to stop and to sit down upon an outcropping of rocks and to gaze over all that lies before them. One can get lost in their thoughts up here and if but for a brief moment, time is held in captivity. 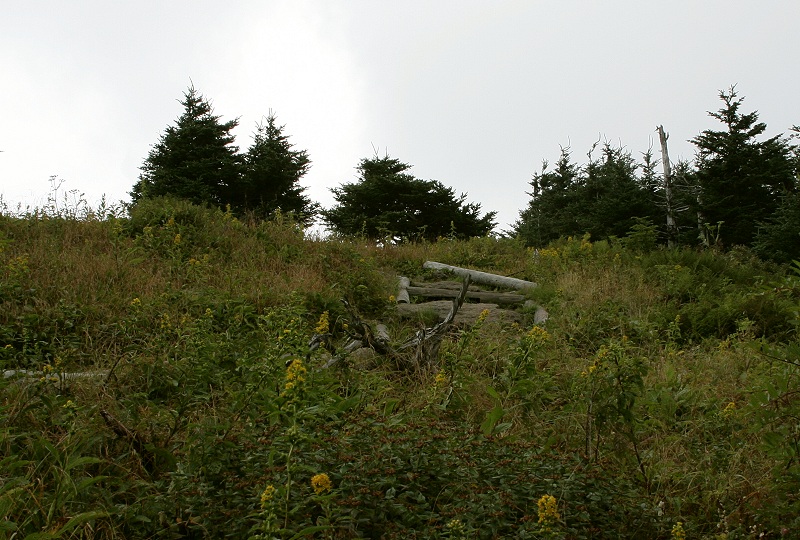 Arriving at the summit of Mount Craig, I am reminded of a children’s song that was often sang in elementary school, “The Bear Went Over the Mountain,” to see what he could see… As foolish as that may seem, ones senses do long to see what is on the other side of a foothill or a mountain when out hiking like this. Often I am spurred on, inquisitively, by what is just around that next bend or over that next rise, in a trail that I may be traveling and therefore I add more memories and many more miles of them, to my mountain adventures. 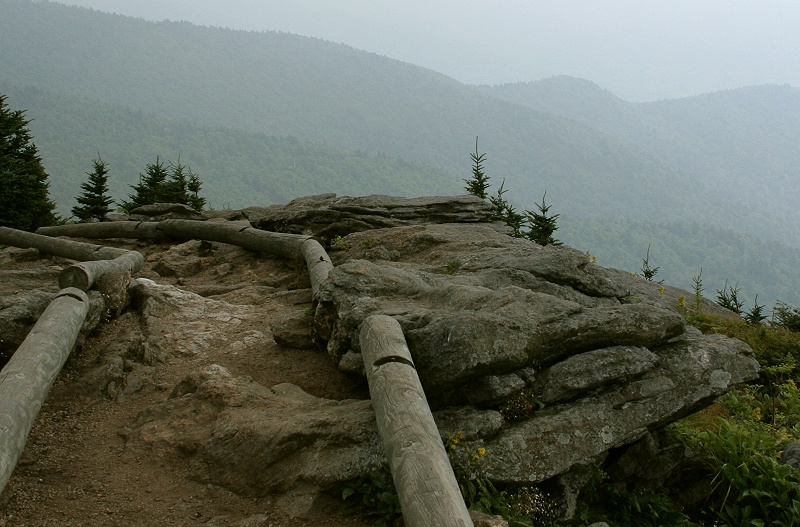 At last here we are, finally at the top of Mount Craig and isn’t it wonderful! Please note, however, that one must stay within the bounderies of those logs that mark the trail. All that is living up here is endangered as a species and found nowhere else in the world but here on Mt. Craig in Western North Carolina, at least to my understanding. But, the adventure and the hike does not end here. Another one and a half miles farther on, will bring me to “Big Tom,” the mountain named after renowned mountain man, hunter, and mountain guide Big Tom Wilson, most noted for finding the lifeless body of professor Mitchell at the base of a 25 foot waterfall that now bears also his name, Mitchell Falls. But that is all another story and another page to be read in the mountains of Western North Carolina. Unfortunately, Mitchell Falls is located on private property and the owner, a staunch environmentalist, refuses access to the falls, except on occasion by certain parties. I cannot say that I blame them though. In my mountain travels, I have seen many examples of the thoughtless acts of human beings, in regards to the stewardship that has been set before us.

Ken,
Another thoroughly enjoyable essay. It was a pleasure to read about your most recent adventure.

That first image makes me want to just walk through the screen. I can relate to what Elisha Mitchell was referring to in his letter to his wife.

(I've got to get out more. I have a small journey planned for a local rainforest).

We will be looking forwards to seeing photographs of your trip. I have only visited one or two rainforests in my life so far and those were outside of this country.

Every so often, someone comes to these mountains to end their lives, unfortunately, for some reason or another, unlike what happened to Elisha Mitchell as he was attempting to make his way off the mountain and back to Big Toms cabin, where he was to meet his daughter and son the next morning. History has it, that when Mitchell’s son and daughter arrived at Tom Wilson’s cabin and inquired of their father, Big Tom Wilson replied, "If he's still on that mountain, he's dead." Tragically, after the hunt for Mitchell ended, it was as Big Tom had said and the professors life ended in one of the most picturesque of places to be found on the mountain.
Top

I will be retiring in a few more years and hopefully, I can find it to be possible to reside somewhere near or maybe in the heights of these mountains or those adjacent to them. A place where it snows every winter and I do not have to be out to go to work, where I can take a hot thermos of coffee, my camera, and my walking stick and walk a solemn trail amidst the firs and spruce, and the quietness of a freshly fallen snow. 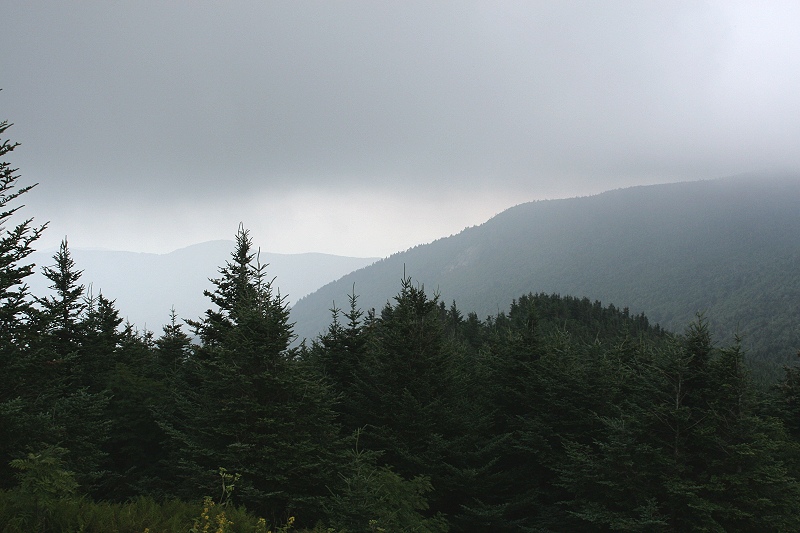 The summer nights in places such as this can be quite comforting also. The sounds of the owls and the whippoorwills among the trees can be quite soothing in the distance and nothing is more beautiful than to sit out on a rocky crag and to watch a brilliant yellow harvest moon set in cobalt blue, as it rises over the distant mountains and into the waning sky of day. 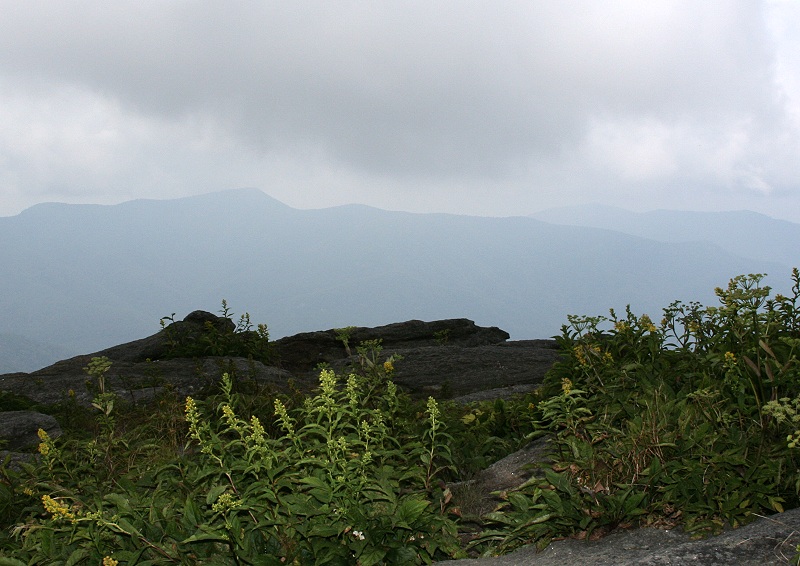 Ah yes, such a dreamer I am but for the time being, I will walk the trails and photograph the insects, the wildflowers and whatever else there may be to capture my attention. By the way, as I drove up to Mt. Mitchell that Saturday morning, a wolf crossed the highway right in front of me, right near the rangers residence it was. 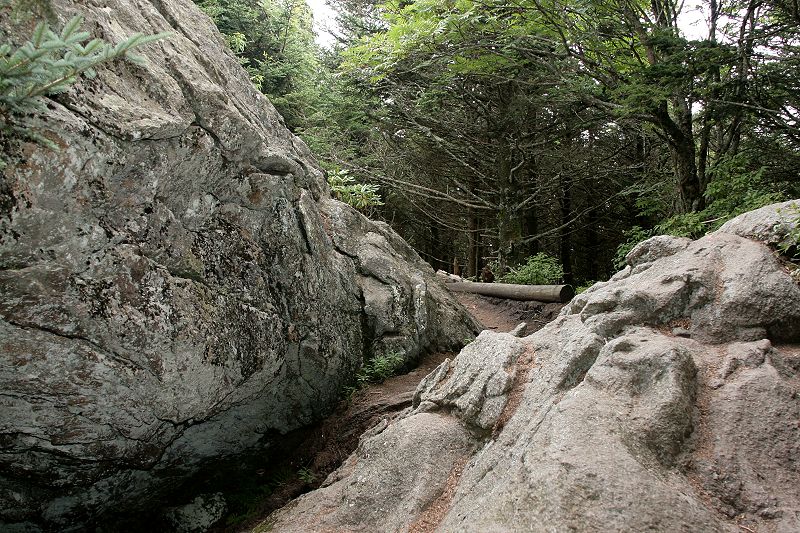 And so this completes my journey for another time and another place here in the mountains of Western North Carolina. Who knows, one day I may meet one of you on this trial that is shown above but be careful though, to the left of that large boulder is most certainly to be straight down!