Here, we can see an interesting exhibition of high quality photographs of insects using the techniques familiar to members of this forum, from the collections of the Oxford University Museum of Natural History.

I hope you enjoy

I'm intrested in the "bristles" inside the jaws/mandibles of the "Ground beetle". There's very little haze around them. That takes (for me) a lot of retouching. Perhaps it's to do with the lighting. They left some retouching not done on this one, so it doesn't quite tally that they would have spent a lot of time reconstructing.

wow.. now this is motivating...

also, i wish i received gift-wrapped insects from the museum
--bob

Thanks for posting this. Really great stuff.

In the video he describes shooting multiple stacks for each bug in order to have different lighting for different part, which, in addition to taking A LOT of time, must be pretty interesting to composite. The Stackshot probably helps with repeating the exact same stack, but you'd think there would be some variations in scaling and getting things in the stacked images to line up that would not be so easy.

But these images look really impressive even fully zoomed in.
If your pictures aren't good enough, you're not close enough. - Robert Capa
Top

The concept reminds me of some stuff that Steve Valley did at Oregon Dept Ag back in 2005 or thereabouts, when he stack-and-stitched a collection of Siricid woodwasps to what then seemed like a gazillion pixels wide. The images would have been wonderful to explore, but alas, they ended up getting published in print at only about 170 dpi on 8.5x11" paper, so effectively only about 2 megapixels. (For more info, search the forum for "Siricid".)

Those huge prints by Levon Biss would be a true delight to get close to.


MaxRockbin wrote:but you'd think there would be some variations in scaling and getting things in the stacked images to line up that would not be so easy.

The stacks shown being shot are all with a 10X objective. That's high enough magnification to just treat it as telecentric, which would take care of the scaling and most other issues that might make alignment difficult.

Doubtless he knows he could have used a "proper" telecentric objective.
Iirc a Mitutoyo behaves more telecentrically than the one he's using. (I must find a pc with working audio - could be missing something here)

Even so, those bristles would be very hard to keep "clean"
image snip... 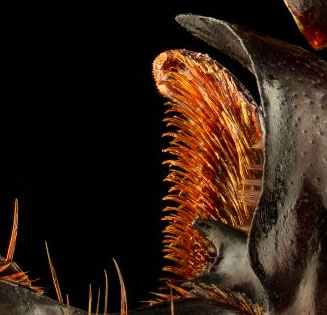 (Copyright generally allows smallparts of a publication to be reproduced for "fair use", though I'm afraid I may have stolen hundreds of images here)
Now, Oxford is an hour up the road, it would be worth a detour.
Chris R
Top

Great work there. And man what a beast of a printer!!
Flickr | www.laurieknight.net | Blog
Top

lauriek wrote:Great work there. And man what a beast of a printer!!

I agree - his photos are impressive but that printer left me breathless for a brief moment.
Top

This is doing something which I feel a high proportion of the people who love this forum want - to use technology to reveal what we couldn't have seen until recently. This is a memorable use of the methods.
Many here could explain in principle how it's done and could demonstrate the knowledge, but to put it all together on this scale, is more than daunting. The result is truly "more than the sum of its parts".

I bet they get cross when one of the print heads blocks.
Chris R
Top

I think the lighting also makes these photos very distinctive. In the video, it sounds like his motivation for the stitched panoramas was at least as much about controlling the lighting on different parts of the bug as it was about getting the enormous detail (in fact, the detail really peters out before you get to the final zoom I think).

Just in the setups we can see, I think he's got... A large studio strobe (or continuous spot?) as the main light going through some vellum arched over the bug (it's in one shot and gone in another - probably to make the bug visible for the video), he's got vellum doubled up on the strobe itself. He's got an aluminum foil reflector bouncing some of that strobe light back towards the back of the bug, probably for a rim effect. He's got a naked bulb on a large articulated arm (maybe for some highlights? But it's probably going through the velum too, so maybe it's just for a little more directionality). Plus, another large studio light coming at the bug from below and behind. Another rim light? He's got great control of it because he's got some highlights around the edges with other parts going into deep shadow.

Here's a capture of the overall setup 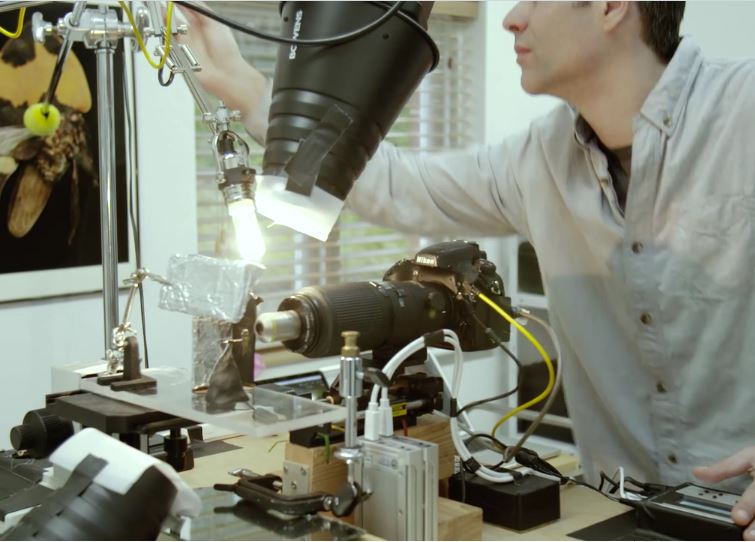 And here's another from the first few seconds of the film where it looks like there's some kind of diffusion material close to the bug: 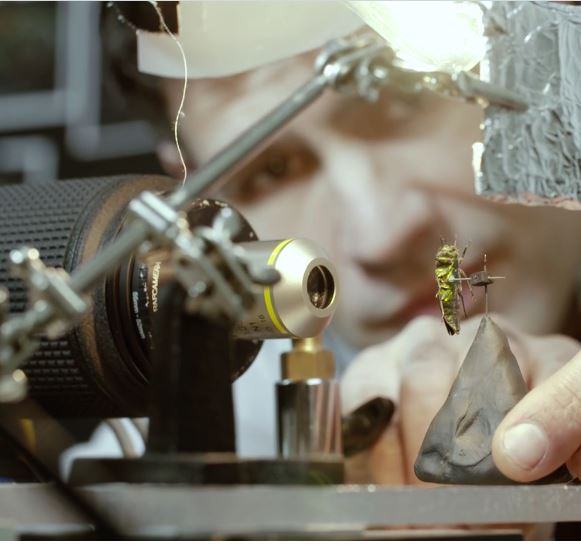 And another view of the whole setup: 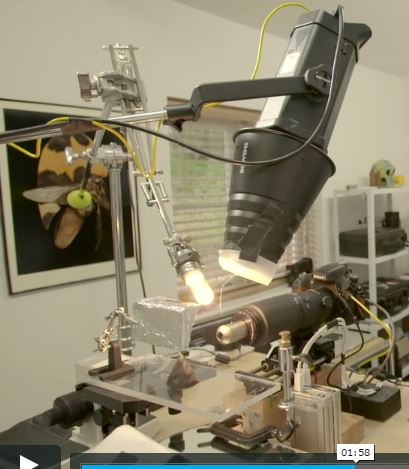 Also, if anyone is curious, his printing company...
http://genesisimaging.co.uk/genesis-ima ... ur-skills/
If your pictures aren't good enough, you're not close enough. - Robert Capa
Top

MaxRockbin wrote:I think the lighting also makes these photos very distinctive. In the video, it sounds like his motivation for the stitched panoramas was at least as much about controlling the lighting on different parts of the bug as it was about getting the enormous detail (in fact, the detail really peters out before you get to the final zoom I think).

This is the thing I do not understand: How can you change the lighting during one of those stitched photos on different parts of the specimen? I mean how to stitch them later if the lighting was changed severely??
Has anybody of you tried this??

Im stitching photomicrographs for quite a while now, but always try to keep the lighting as constant as possible, to not get any problems in stitching and postproduction.

Another thing I´m wondering is: How clean is his room? For my first stitches that where combined from around 10.000 single shots, the shooting took almost a week. I constantly had the problem that in the last images there was much more dust than in the first ones (especially on a Lucanus sp. that took me 30k photos; and I always covered the specimen during the time, when I did not shoot photos).

I believe that it needs a lot of postproduction to get such clean and superb fotos as we see on Levon Biss´website. And I also believe that comming from advertising photography is of great help for developing such postproduction skills.
Top
Post Reply Previous topicNext topic
12 posts • Page 1 of 1