Plume moth (or a little owl?)

Plume moth (or a little owl?)

I shot this plume moth the other night, I think it looks like an owl of some kind at this magnification! 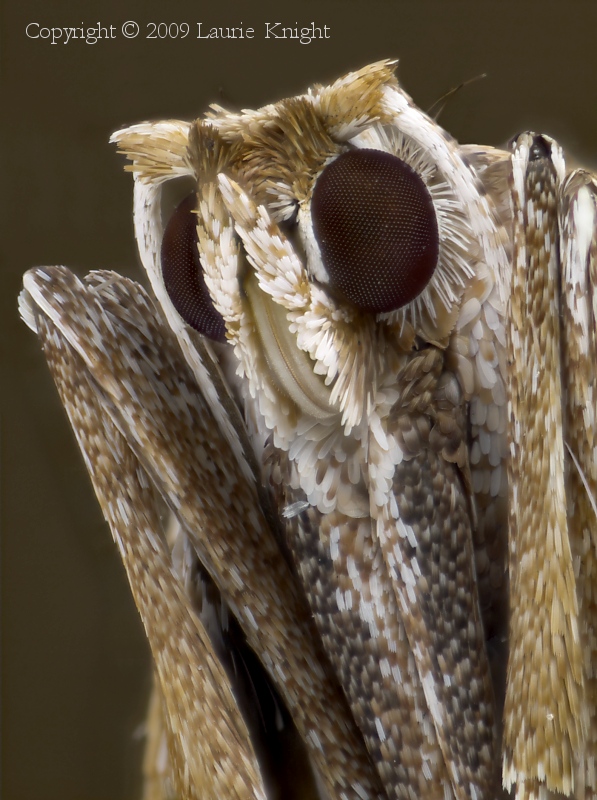 My word! Where did you find that? I've tried attracting moths with a bright light but only ever see an occasional tiny one.
Top

I love looking at your photos Laurie!!

Chris, We have a little low power (11w maybe?) light outside the back door that comes on when it gets dark. It seems to attract quite a few bugs, I've found lacewings, caddisflies, flies, spiders, moths (and probably other stuff I can't remember) in it's area...
Flickr | www.laurieknight.net | Blog
Top

This one makes me grin every time I look at it. (Three times now!) Nice work.

Brilliant work Laurie! I really like the framing which makes the owl-resemblance is quite striking.

lauriek wrote:I shot this plume moth the other night, I think it looks like an owl of some kind at this magnification!

Before I saw the image I thought you were stretching a point but it really does. Maybe you should have checked how much of 360 degrees its head could rotate.

A very striking shot. A triumph for one of my favourite lenses.

It looks like it can only see forwards, is that unusual for a moth?

I have a 150W light outside. I keep checking, nothing there!
Top

ChrisR wrote:It looks like it can only see forwards, is that unusual for a moth/

No, but it would be for an owl!

ChrisR wrote:It looks like it can only see forwards, is that unusual for a moth?

I suspect an illusion. In the picture, it appears there is a hood or cowl around and behind the eyes, preventing them from seeing much except forward. However, the "front edge" of that cowl is actually a couple of ordinary threadlike antennae, here tucked down beside the head and inside the legs. When the moth is active, the antennae will be held up and forward, and the moth will have full view to the sides and somewhat back as usual.

Rik's absolutely right on the antennae, it's a bit of a trick that it looks like an owl, though not intentional on my part!

What amazes me most about these moths is that they can actually fly at all with the amount of wing area they have, guess that shows the efficiency of nature.

Harold, that lens now has a special place in my collection, I think it's my current favourite. I suspect the 10x Nikon CF has slightly more resolution available but I find the magnification range of this lens extremely useful.
Flickr | www.laurieknight.net | Blog
Top

The 10X Nikon CF has quite a bit more resolution than the Olympus 38 mm f/2.8 bellows lens. See HERE for direct comparison.

But as I noted in that thread, the Oly 38 is definitely my most used lens.

Thanks Rik, I'd managed to miss some of the middle of that thread...
Flickr | www.laurieknight.net | Blog
Top
Post Reply Previous topicNext topic
16 posts