DaveW wrote:I know many have Lester Lefkowitz's book "The Manual of Close-Up Photography", so see his combination of three sets of standard bellows plus extension tubes on p.86.

For those who don't have a copy of the book, let me quote the introduction of Lefkowitz's discussion (page 85):

There are special cases when extremely long extensions are necessary. Examples include: (1) a need for unusually long working distances and high magnifications, such as when photographing dangerous or remote industrial or medial procedures, or when recording behavior of misanthropic or skittish animals and other biological species; (2) a desire for high-resolution photography (scientific, forensic, medical, or professional) at magnifications greater than 10X (10:1) without buying the expensive true macro lenses.

It's important to note that the previous page is titled "WARNING: DIFFRACTION!" (in caps and boldface, just like this).

The example on page 85 shows an 8X image that is already quite soft even at its published size of 3 x 4.5 inches. The example on page 86 shows a chain of 3 bellows, with a 105mm lens on the front of it. The caption also describes the picture next to it, which was shot with a 200 mm lens. That picture is of the "Star of India -- world's largest blue star sapphire", shot in situ at the American Museum of Natural History, sitting "6 inches behind a very thick slab of impenetrable glass", and requiring a working distance of 28 inches even at 0.5X magnification. The example on page 88 shows a 22X shot of a dollar bill. That image is reproduced at 2-1/4" square and is barely sharp even at that small size.

What Lefkowitz is demonstrating is the use of long bellows to produce images that are large enough to fill a 35mm frame, regardless of how fuzzy those images might be.

With film, there are compelling reasons to do this. Projecting a cropped slide doesn't work very well, and with any film, using the whole film area produces significantly better gradation than using only a part of it.

With digital, the advantage is quite a bit less because resizing is easy and the images are not so noisy to start with. Given that the underlying image is fuzzy, it's hard to tell the difference between 2000x1500 pixels rescaled from a full-sensor image of 4000x3000, and 2000x1500 pixels simply cropped from an image at half as much magnification.

Finally, Lefkowitz's book deals primarily with 35mm film -- a 36 x 24 mm sensor. But elf asked about the Olympus e330, which has a sensor barely half that big, only 18 x 13.5 mm. The acceptable size of the Airy disk, and the corresponding bellows length, simply scale to match -- half as big, half as long.

The bottom line, in the context of elf's question, is that long bellows could be very useful if he wanted to make high magnification fuzzy pictures with really excellent gradation. Barring that, shorter bellows will work just fine.

Thought I would add a practical experience to the above discussion.
Top: Tip of FW of noctuid moth - full frame, width of frame = 2.5mm (=9.5x mag on sensor)
Middle: 800 px selection of actual pixels
Botton: Set up

I could have got the same mag using a 10x ELWD microscope objective but the working distance (10mm?) would have been considerably less. 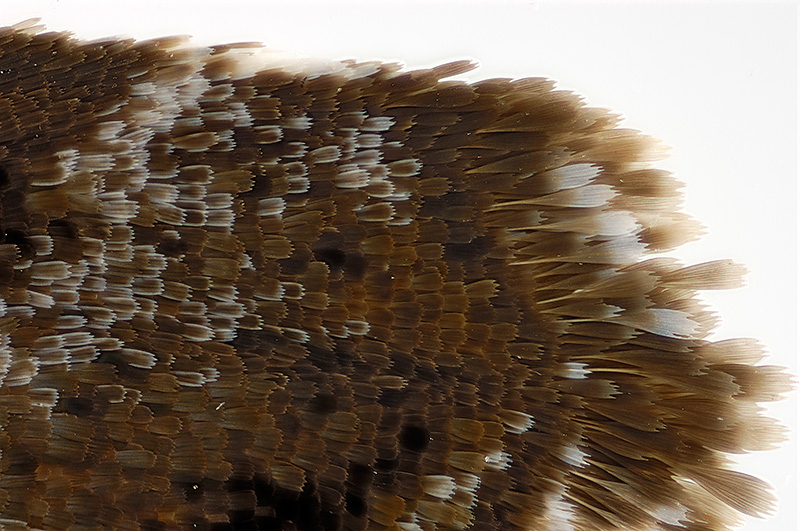 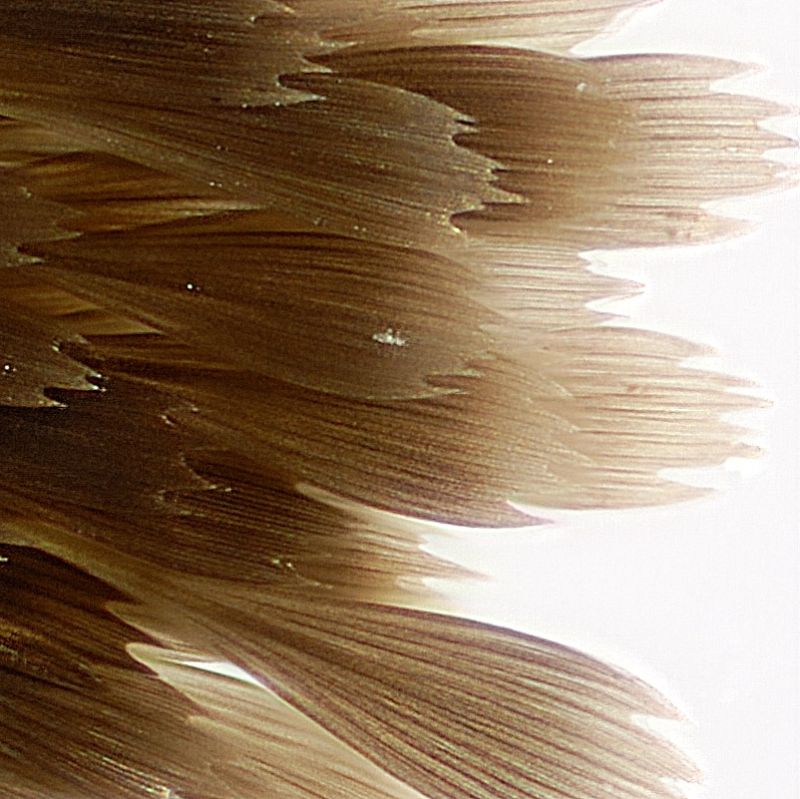 NU: Can you post a similar image using the 10x ELWD microscope objective?

I ended up with 210mm bellows draw and I could increase that with other extension tubes to 315mm. I can't say that I have any usable images yet with the maximum draw.

Your image appears to be at an angle to the lens? At that sort of magnification it will need to be exactly parallel with the front element. That is unless your bellows has movements and allows you to use the Scheimpflug principle. Otherwise you will need to photostack to cover the depth of field required.

Here's my take on this setup.

You're running an f/2.8 lens at 9.5X. Assuming no issues with pupilary magnification factor, that turns into effective f/29 from the standpoint of the camera.

As shown at http://www.cambridgeincolour.com/tutori ... graphy.htm, that combination makes a pretty large Airy disk. Most of its energy is spread over an area about 3 pixels across.

That's quite a lot of diffraction blur. Aggressive sharpening can back out some of the blurring, but even so, you're probably left with empty magnification.

To determine how much empty magnification, I ran an experiment with your second picture, the "800 px selection of actual pixels".

The experiment was this. I pulled the posted image into Photoshop and cropped it to 798 pixels square to make the dimensions exactly divisible by 2 and by 3. Then I made a copy of the image, reduced it to 50%, expanded it by 200% (thus restoring the original size), and layered it over what you posted. The result was a slight reduction in visible detail. I did the resizing again, this time reducing the image to 66.66666% and expanding it by 150%. The result the second time was no visible difference from your posting except for a slight reduction in pixel noise. Initially I thought there were no differences at all and that I had botched the experiment. To see that in fact the images were not the same, I had to have Photoshop explicitly compute the differences of pixel values, and multiply them by 10X.

The only way I see to interpret these results is that the pictured setup has at least 50% more magnification than is justified by that lens & sensor.

The extra magnification is not quite a complete loss. If you reduced the extension to give only 6.3X instead of 9.5X, your working distance would increase slightly to maintain focus. Because the diameter of your lens is fixed, the increased working distance would slightly reduce the NA of the lens, which would slightly reduce its resolution on the subject. However, that reduction is less than 5%, and in exchange you would capture over twice the subject area. (1.5*1.5=2.25)

This issue of bellows length is packed with tradeoffs.

If you care about an image area of exactly 2.5 mm wide, and you need 30 mm working distance, and you have this 40 mm lens handy, then 380 mm extension is just the ticket.

Or if you need the working distance, but there's added value in imaging twice the area with a 5% resolution loss, then a shorter extension with the same lens would be better.

Or if you need more working distance, then you need an even longer extension -- and a really good longer lens too.

Or if the working distance is not so critical, you could use one of those Nikon CF Plan objectives and again get almost twice the resolution, at the cost of working at 9 mm instead of 30 mm.

Choices, choices... They're a burden sometimes.

PS. Do you know what species the moth is? It looks very much like one of the Yellow Underwings, Noctua pronuba perhaps?
Top

The shot of the noctuid wing (Syngrapha octoscripta) with that ridiculous bellows extension was taken in desperation. A few days before you explained why extra long bellows were unnecessary for the setups most of us use I made a non-cancellable order for a Nikon PB-6E bellows extension. So when it arrived I just had to see if it was useable. If only I knew then what I know now ......

Anyway, thanks Rik for your detailed explanation and possible options.
As I am still using a single flash I do like 'long' working distances and so 30mm is preferable to 9mm; and 25cm extension (to give 6.8x mag) is preferable to 38cm. I guess I will re-box the PB-6E and keep a look out for a ULWD.
NU.
student of entomology
Quote – Holmes on ‘Entomology’
” I suppose you are an entomologist ? “
” Not quite so ambitious as that, sir. I should like to put my eyes on the individual entitled to that name.
No man can be truly called an entomologist,
sir; the subject is too vast for any single human intelligence to grasp.”
Oliver Wendell Holmes, Sr
The Poet at the Breakfast Table.

NikonUser wrote:If only I knew then what I know now ......

You got off cheap. I spent hundreds of dollars to acquire one of the legendary Luminars, only to discover that it gave less resolution than an inexpensive 10X objective I already owned! I was in denial for quite some time over that one...