(Note, I also posted this over at microbehunter, but figured it might be of interest here too).

This is something I've been meaning to try for a bit and finally got around to actually doing. Though Nikon microscopes are generally easy to adapt cameras to, like most makers there isn't really a good dedicated solution for adapting aps-c cameras, either in their finite or infinite lineup. The closest is the 2x photo eyepiece (Pl or PLI) which is rare and very expensive. As far as accessible "official" options you have a 1x photo eyepiece which only covers a 16mm diagonal, and a 2.5x which gives an image sized for full frame. Neither is a very good solution.

In terms of unofficial options the best is just directly putting the intermediate image onto an aps-c sensor. A ~27mm diagonal is sized just right to squeeze out every bit of good image circle from a Nikon objective this way without adding any additional aberrations.

However, direct projection isn't so easy on every Nikon microscope or head. Some of their heads are annoying to modify and some of their stereo microscopes (which use the same adapting hardware as their compound microscopes) make it almost a geometric impossibility. So there is some value in figuring out a solution that meshes better with the official hardware.

From getting different nikon stuff over the years I have Nikon PL photo eyepieces in 1x, 2.5x, 8x and 10x mags. I decided to try afocal imaging with the 8x and 10x using a 40x pancake lens on my canon T6, as well as using the 1x and 2.5x normally for comparison, and in addition afocal with the 10x/22 Chinese eyepieces I have mentioned in other threads. I also did an afocal image with my UW head, but while the afocal mod worked fine on the other scope I was using it on I'm getting bad corner shading on this one. This isn't a limitation of the objectives as they cover 26.5mm FN UW eyepieces no problem, it's to do with the weird layout of the UW head.

For this test I used a Nikon optiphot a BD plan 10X objective, imaging a dusty wafer with coaxial illumination. These BD plans are known for having significant axial CA but not much lateral CA.

Here's a quick view of the imaged area along with a summary of image coverage: 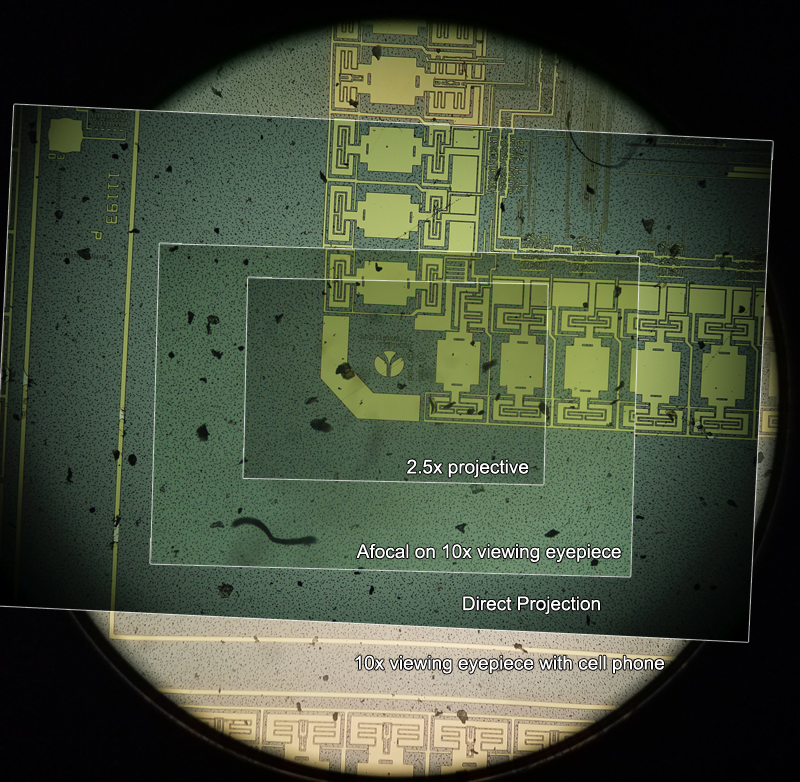 Now let's dive in to the images.
Direct projection: 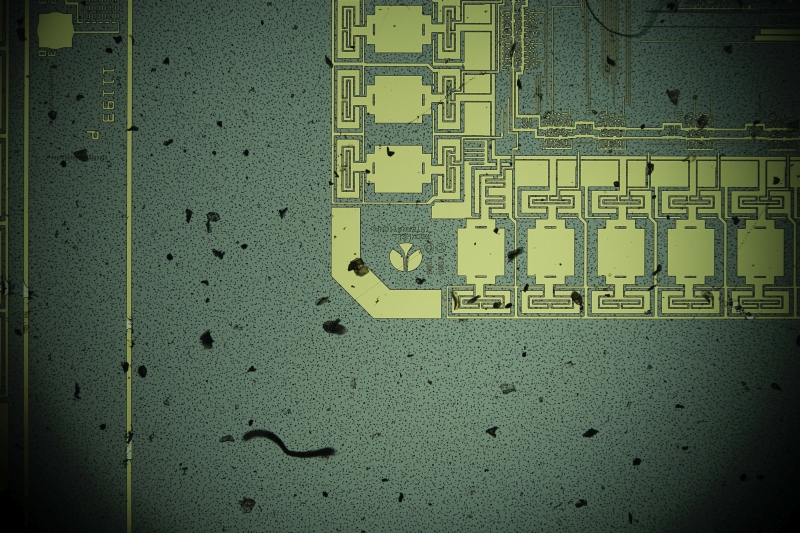 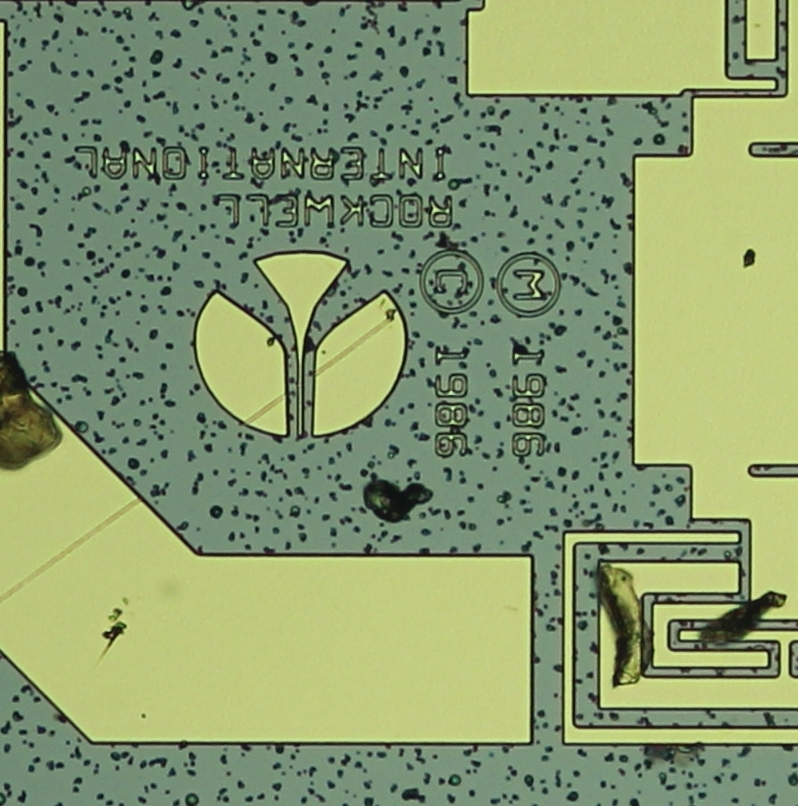 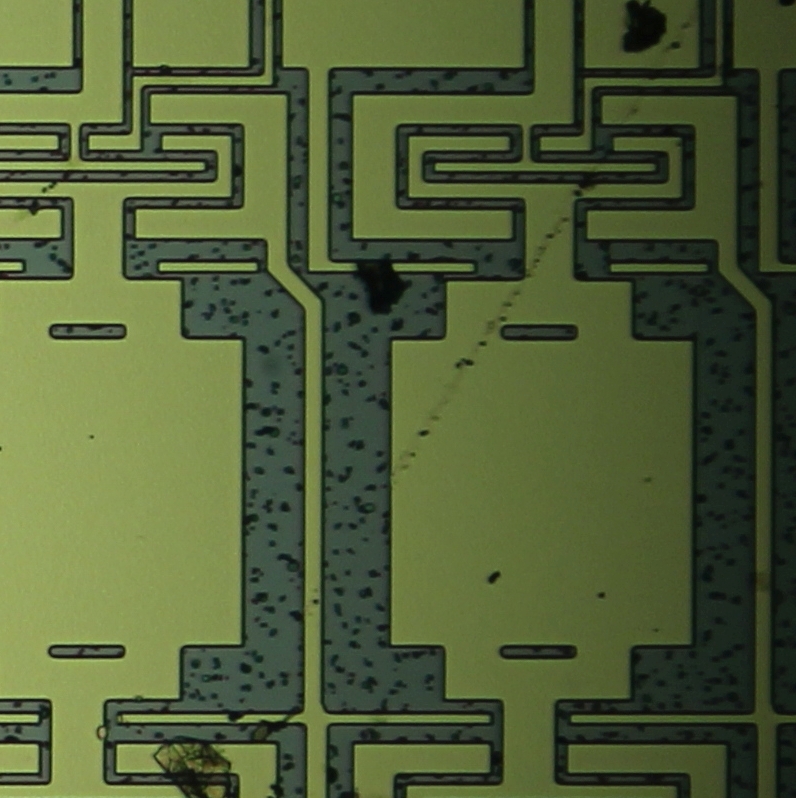 Aside from the awful corner/edge shading this is excellent. It's sharp in the center and there isn't really any lateral CA towards the edges, suggesting any CA we see is added by intermediate optics, either the eyepiece or the camera lens or both. 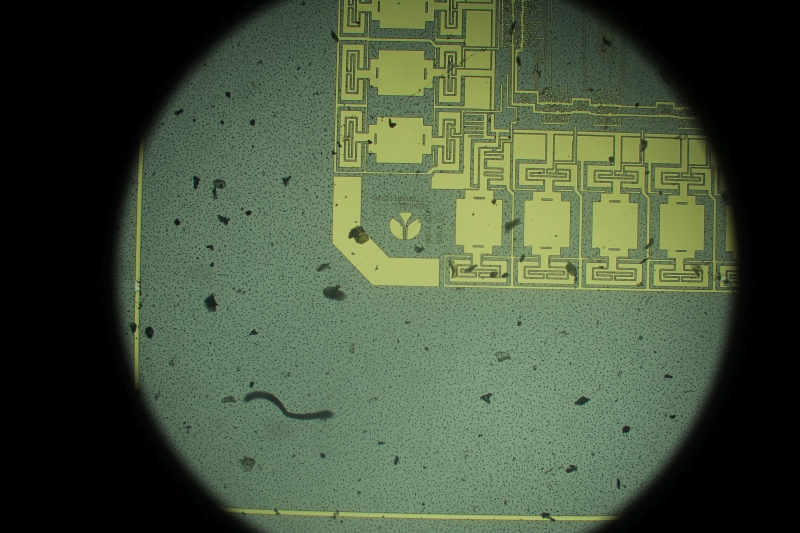 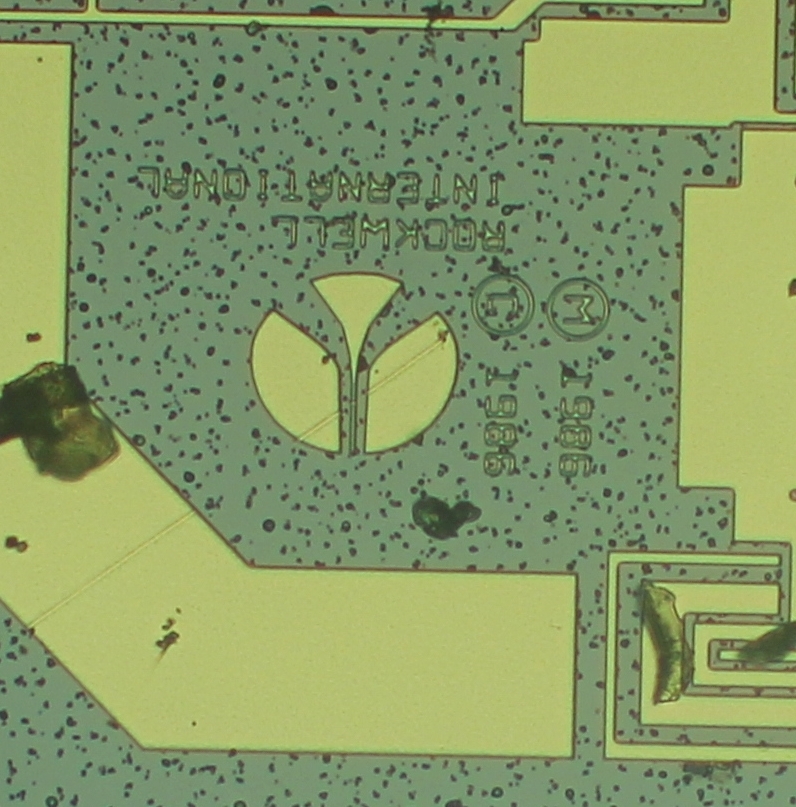 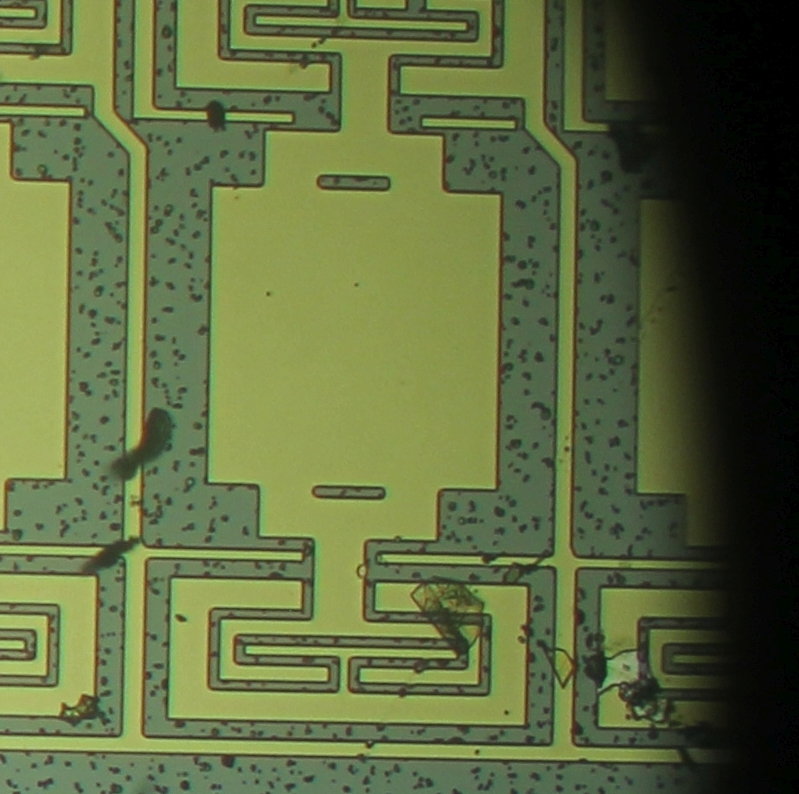 Good image quality in the center, an unfortunate amount of lateral CA towards the edge, and severe vignetting just as expected. 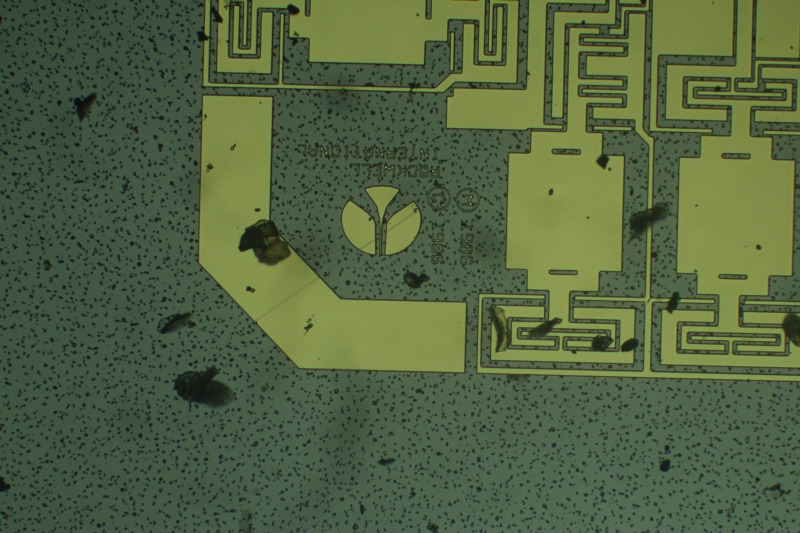 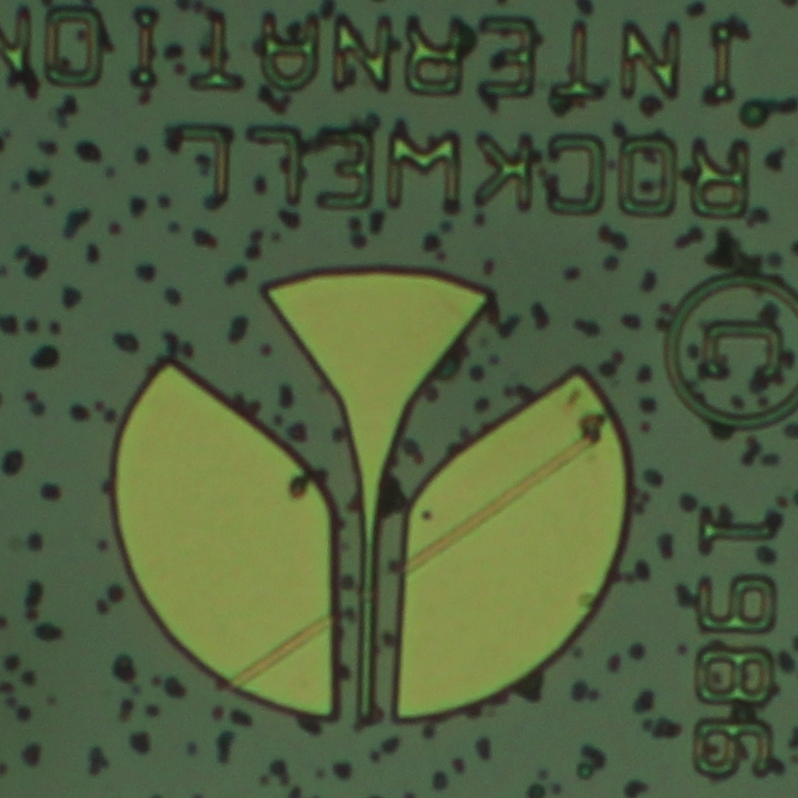 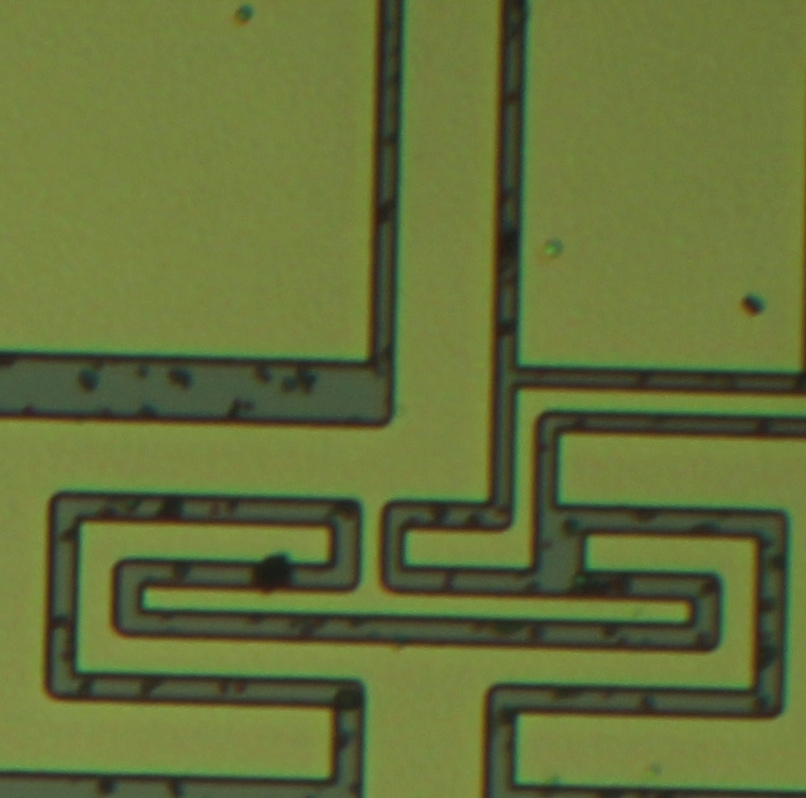 As expected there's a ton of cropping here. There is also a very unfortunate amount of lateral CA, especially since this is cropping off the edges. It might be even worse on full frame. 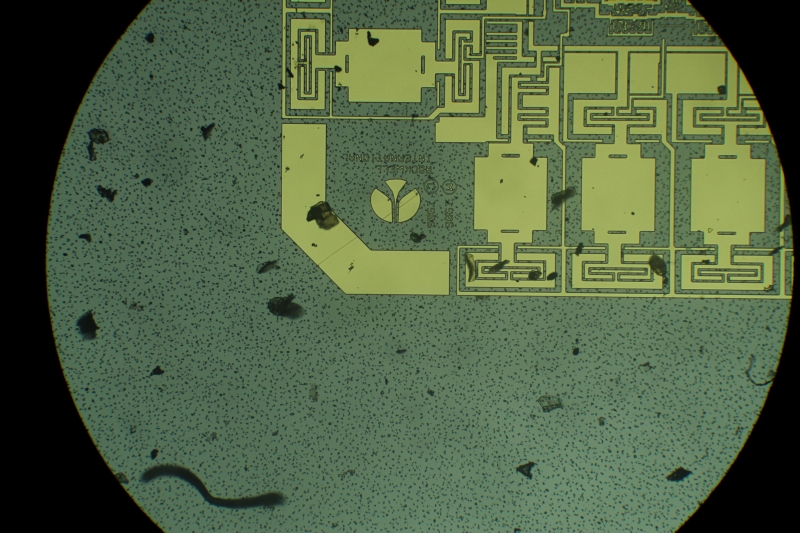 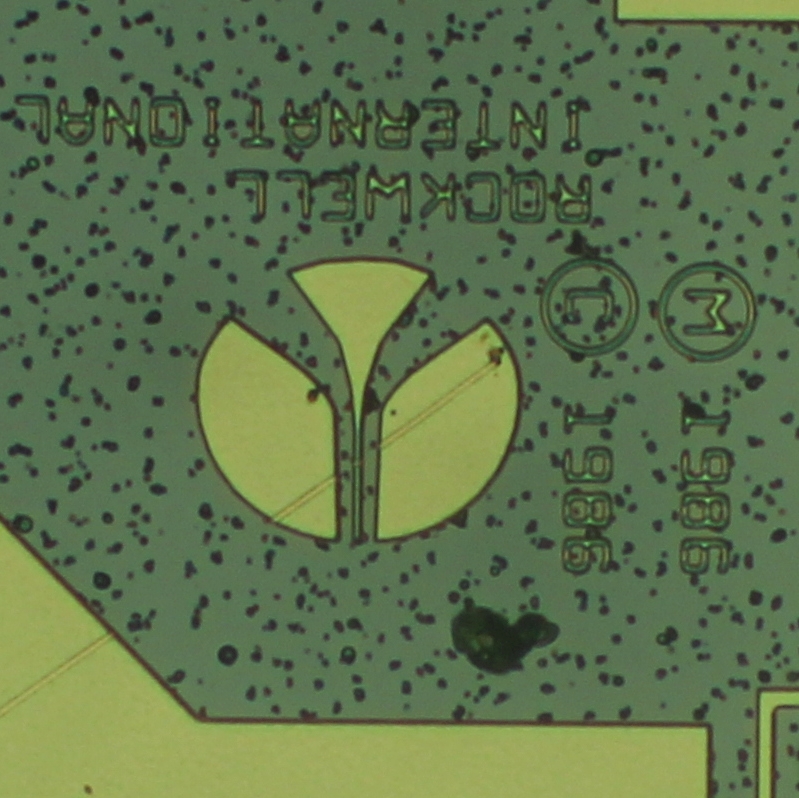 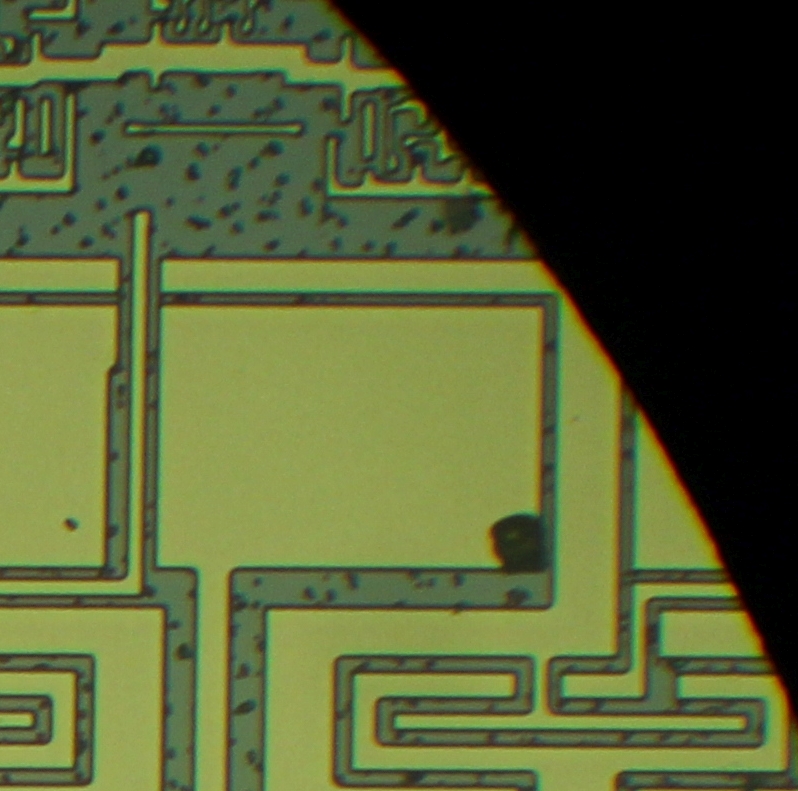 Wider FoV even with the vignetting, but similar levels of CA to those seen in the 2.5x. This one might be viable with a longer focal length lens though. 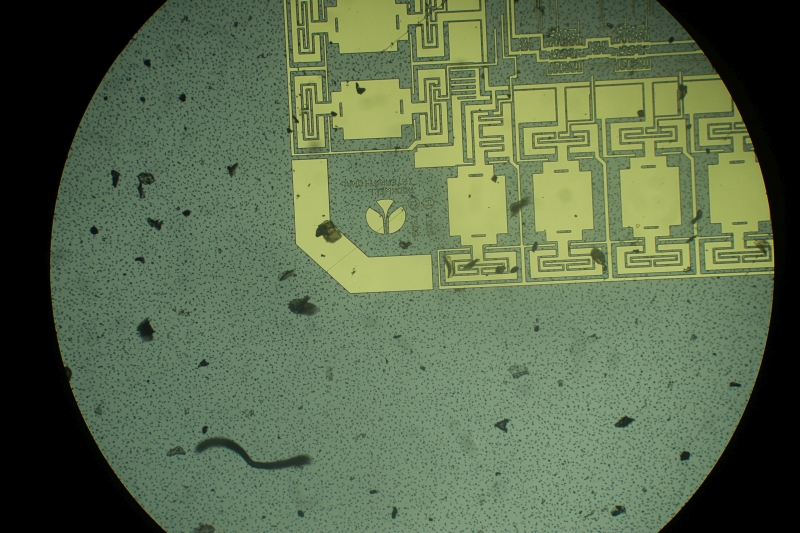 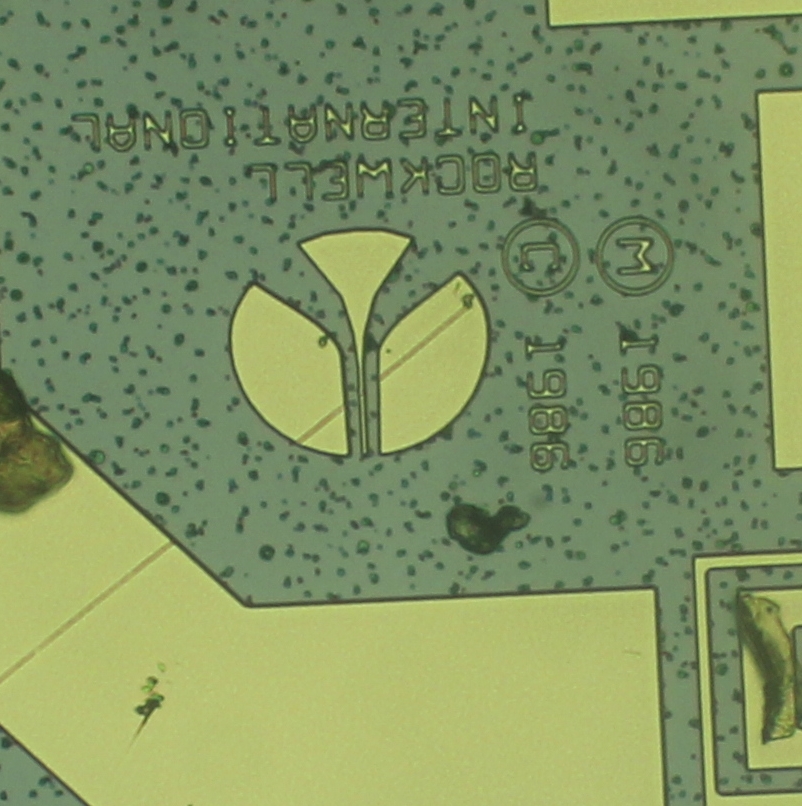 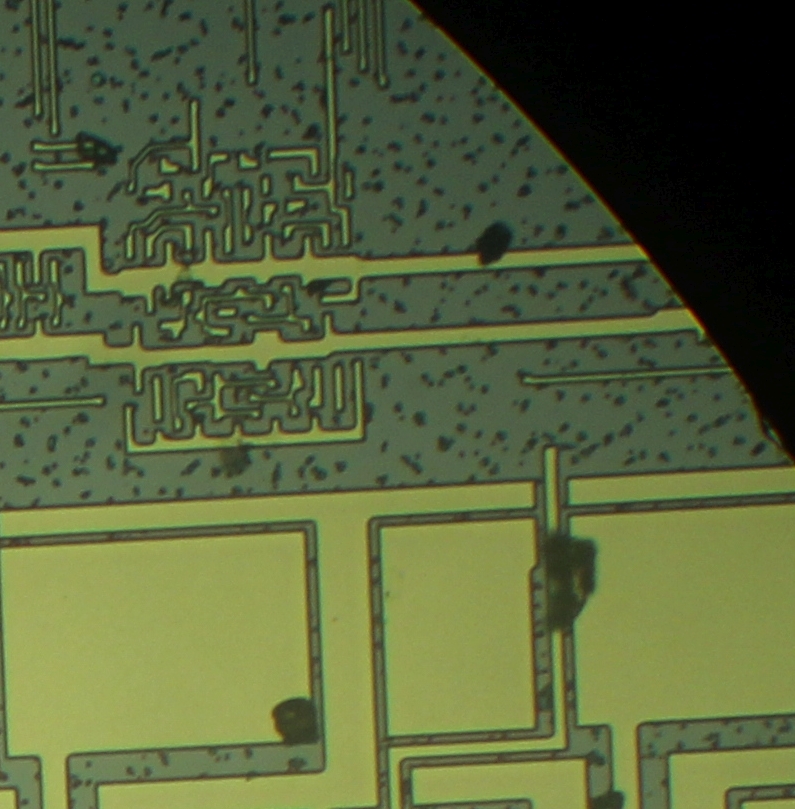 Note I think the lens might have been placed a bit too high above the photo eyepieces. I may try it again with the camera lens just set onto the trinoc port to see if coverage or CA improves. 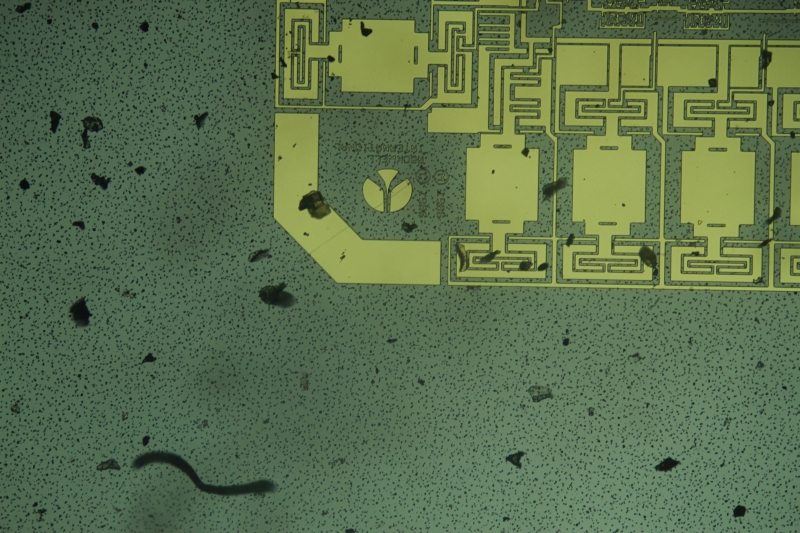 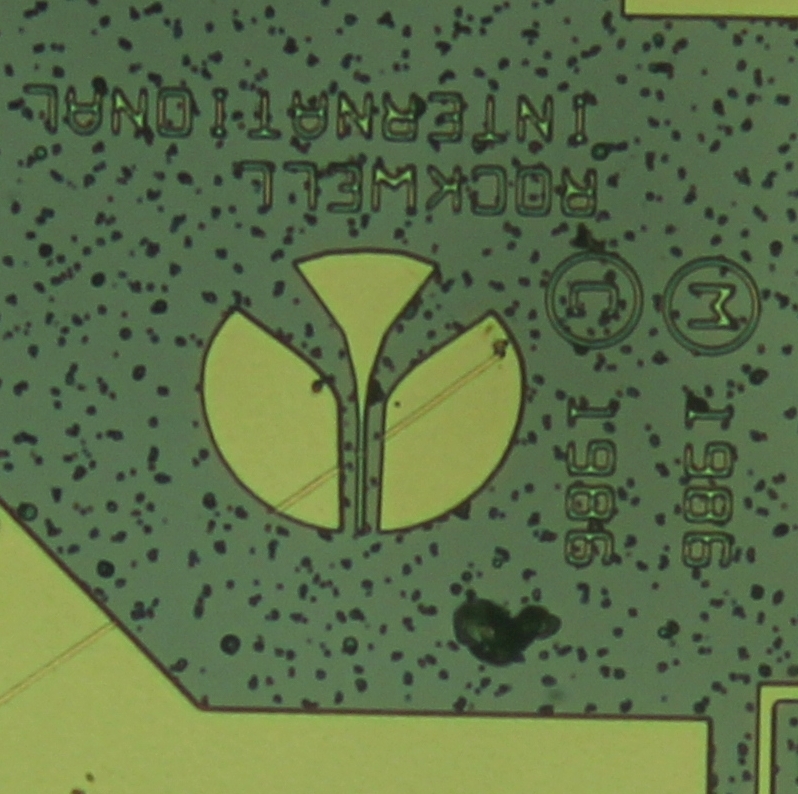 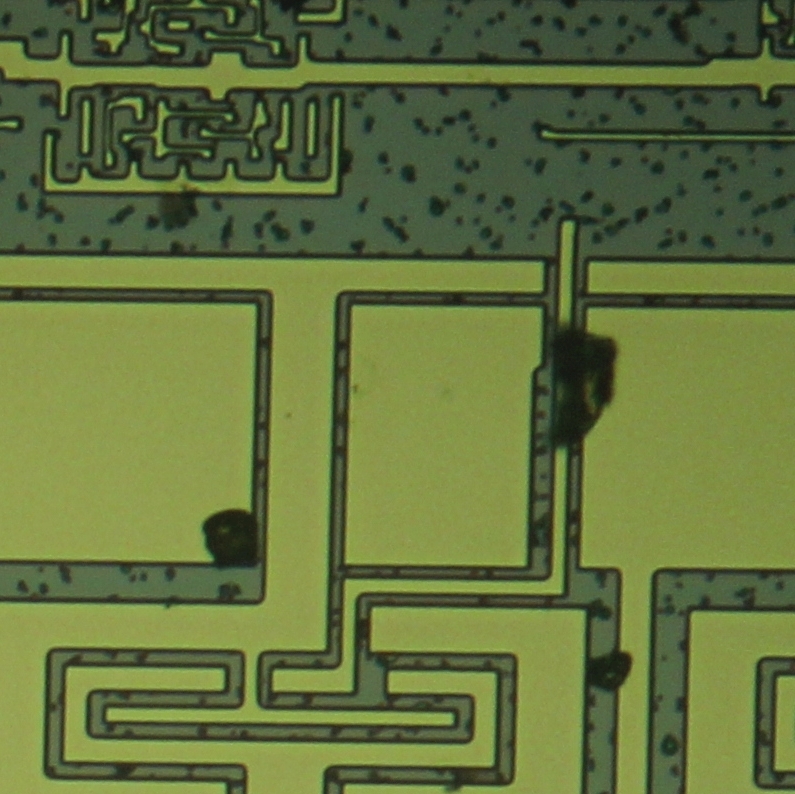 Aside from direct projection this gave the best result. Little to no added CA, good coverage and no vignetting. This eyepiece could even be used with a shorter FL lens as the intro image shows--the diameter of the eyepiece's FOV is about 130% the diagonal of the image taken with a 40mm pancake. So 30mm might be a good fit if you can find a good one.

So, I guess I'd say I recommend direct projection if possible, and if not I'd recommend getting one of these eyepieces and using it afocally.

these results were a bit of a surprise--I've never been a huge fan of Nikon PL eyepieces, but mostly because of their awkwardness for APS-C usage. I did not expect them to perform so badly from a CA perspective, but it's hard to imagine all of my eyepieces have gone bad in the same way. A while back I also tried a 10x/22 eyepiece raised up to project an image directly onto the camera sensor but the results were so bad I didn't feel like posting about it, so I'm really glad this worked out!


Edit: I tried putting the 40mm lens directly onto the 8x and 10x photo eyepieces and got slightly different results.
For the 8x, sensor coverage got a little worse while the covered image got wider, and CA performance improved significantly (or maybe it's a little masked by difference in color temperature, I think I didn't get the halogen lamp to the same setting, but I think the effect is real.) 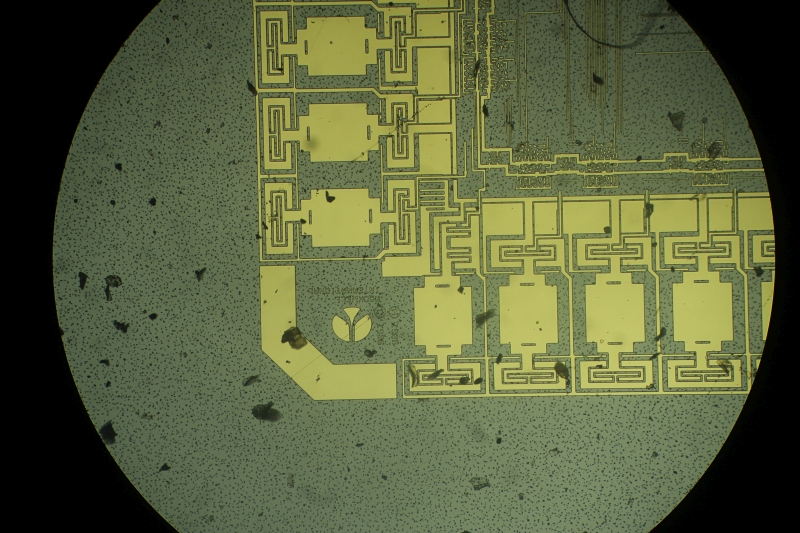 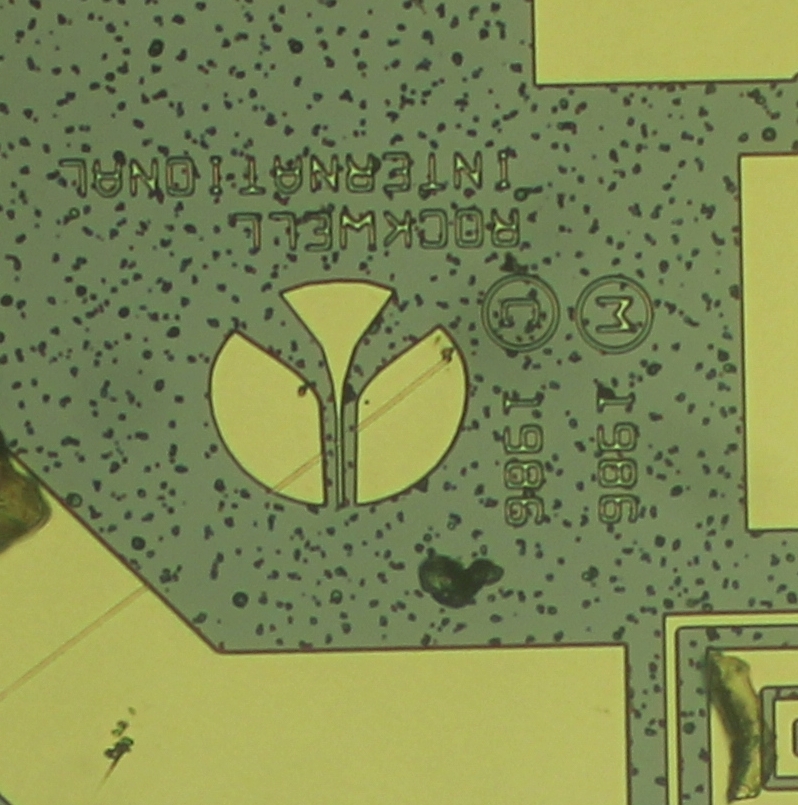 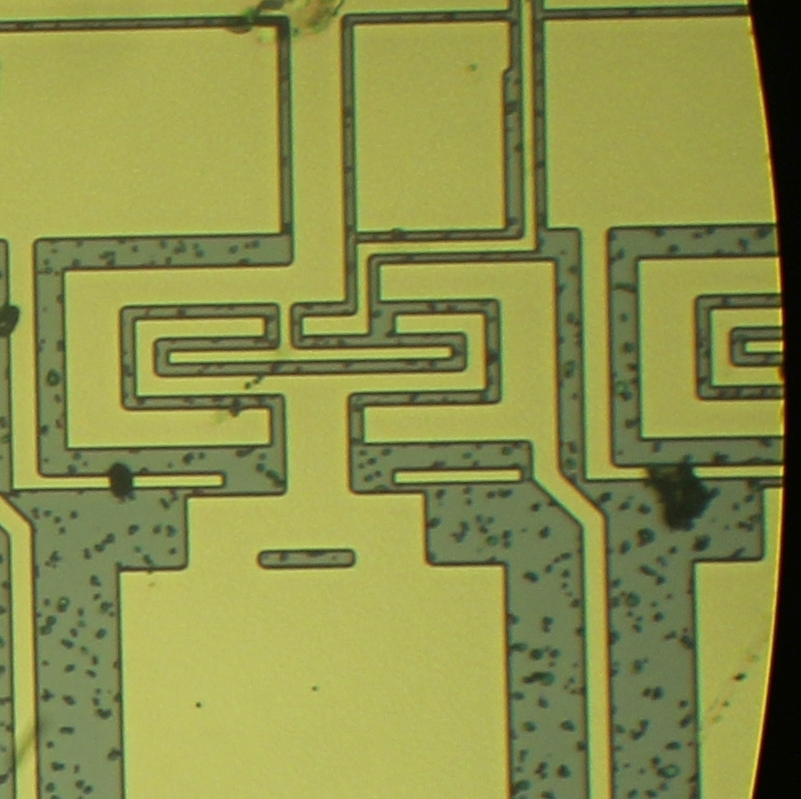 Sensor coverage and scale didn't change pretty much at all on the 10x. It has a recessed front element so was a little further from the lens surface. CA seems similar, though it was low to start with. I think the 8x's CA is better than this now. 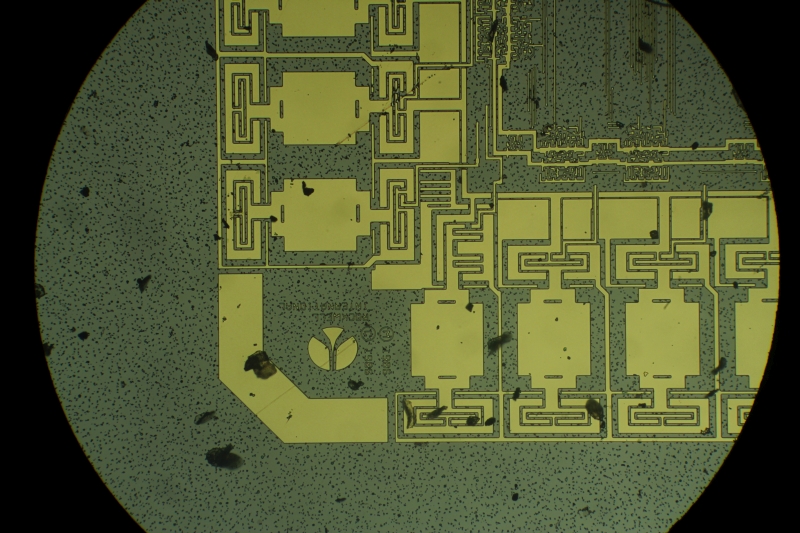 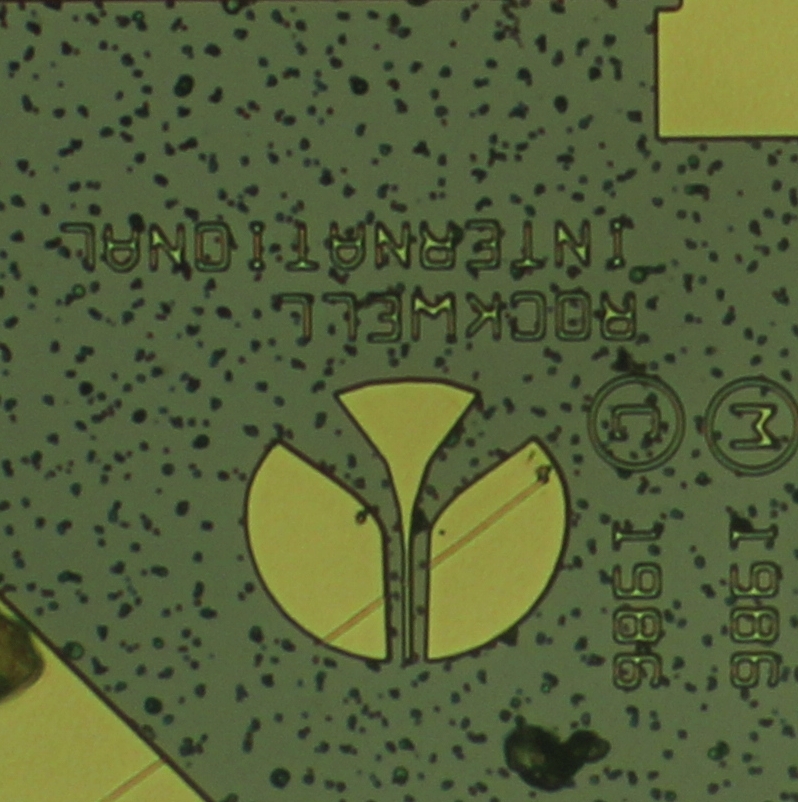 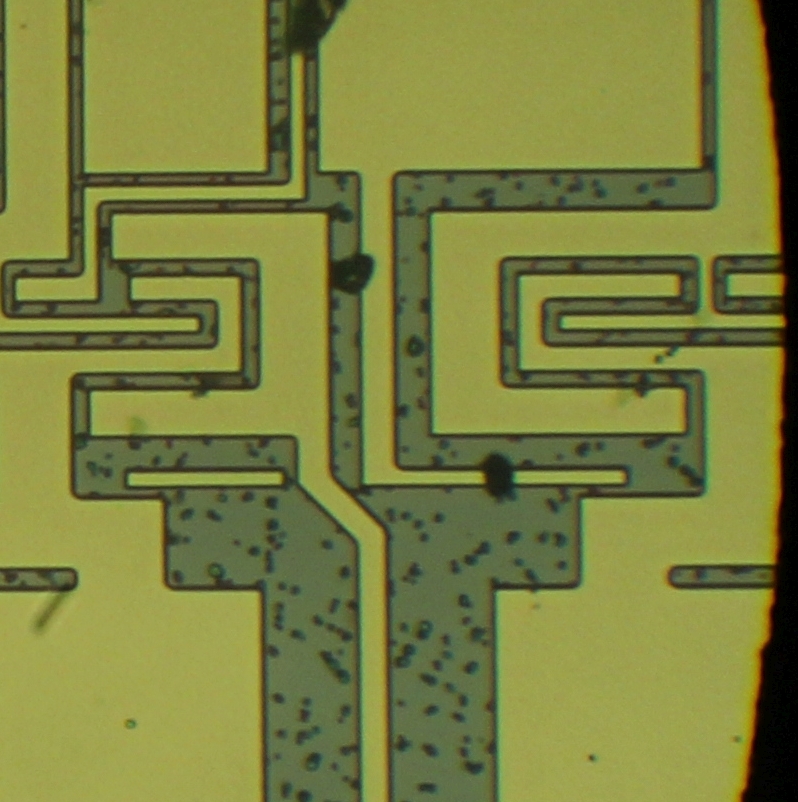 This seems a lot more viable this way, though either might be better paired with a 50mm lens to avoid vignetting.
Top

Did you try afocally with a normal cf or cfn 10X viewing eyepiece?

Because for afocal you use a normal Canon EF lens, does Canon DPP corrects well the residual chromatic aberration shown?
Pau
Top

Can teleconverters be part of a solution when the projected magnification is not enough? I find the Nikon 1.4x TC to be very useful for this kind of thing.
Lou Jost
www.ecomingafoundation.wordpress.com
www.loujost.com
Top

Did you try afocally with a normal cf or cfn 10X viewing eyepiece?

Because for afocal you use a normal Canon EF lens, does Canon DPP corrects well the residual chromatic aberration shown?

I haven't tried a normal CFN, though I do have a few handy so I really should. Earlier tests with my cell phone suggested the CFNs add a surprising amount of CA.
I haven't tried canon DPP at all--I pretty much never shoot with normal lenses so it's a different world for me. It's probably something I should explore, though I don't think the lens is responsible for most of the CA we see here.

I suspect a teleconverter could be useful--usually too little magnification isn't the issue, but it would probably allow the use of a full frame camera for direct projection which would be fairly ideal.
Top

it would probably allow the use of a full frame camera for direct projection which would be fairly ideal.

That's mostly what I use it for.
Lou Jost
www.ecomingafoundation.wordpress.com
www.loujost.com
Top

It certainly seems like the best solution for full frame, especially when we really want to get every last drop out of the objectives rather than just cropping willy nilly like the photo eyepieces do (not to mention how much shorter the stack is!). Have you managed it on a full head, or just directly above the objective as a standalone?
Top

I've done it both ways. Teleconverters are nice because they fit anywhere a camera fits, and they don't require any change in the set-up, nor in the tube lengths. They also provide a means of reaching deeper into a microscope head than you can with a whole camera, and I have sometimes found this to be useful.
Lou Jost
www.ecomingafoundation.wordpress.com
www.loujost.com
Top

So, fun fact, this actually doesn't work on the smz-10. The nominal 0.6x reduction in the trinoc port means vignetting occurs with a viewing eyepiece combined with a 40mm lens on aps-c. It actually shrinks towards the middle of the zoom range and then reexpands at the end. In the mean time my optiphot finally sold, so I can't do directly comparable tests.
Top

Scarodactyl wrote: ↑
Wed Nov 25, 2020 11:24 pm
So, fun fact, this actually doesn't work on the smz-10. The nominal 0.6x reduction in the trinoc port means vignetting occurs with a viewing eyepiece combined with a 40mm lens on aps-c. It actually shrinks towards the middle of the zoom range and then reexpands at the end. In the mean time my optiphot finally sold, so I can't do directly comparable tests.

0.6 x 2.5 = 1.5
1.5X is a good match for APSC. This is what I am doing with the AZ100 with good results (at least at intermediate zoom positions) by means of a 2.5X PLI projective. I suppose that a 1.4X teleextender also would do
The SMZ 1000 allows direct projection on a Canon APSC DSLR with the camera mount very close of the end of the phototube
Pau
Top

The 2.5x does cover full frame with the smz-10 (I know a guy who has one in his lineup), so some FoV is still lost on aps-c. Not as bad as it could be though.
The intermediate image does natively cover aps-c (on smz's without the reduction anyway), but the mounts usually seem to preclude it geometrically. It would be easier with a mirrorless camera I guess, or with the right camera adapter. The Chinese clone adapters produce vignetting on aps-c apparently because of how the brqcket holding the mirrors is shapes, which is a shame given how cheap and compatible they are.
Top
Post Reply Previous topicNext topic
10 posts • Page 1 of 1