My images, above 2x magnification, indicated a dirty sensor so I watched a dozen or so videos and read some of the processes of cleaning one's sensor. I purchased Altura Photo Professional Cleaning Kit and Carson SensorMag 4.5x30mm. I tried three different suggested processes for cleaning the sensor but they were all failures. There was some improvement but after eight swabs and much exercise with the air blower, I cannot eliminate the squiggly lines that show up on a few image stacks. I can see nothing on the sensor using the Carson mag, it looks perfect.

Are there any suggestions as to what I am doing wrong, or not doing?

Sounds like you're doing exactly what I did when I first cleaned my sensor.
But you're only half way through...

Seriously I had a heck of a lot of oil, sticky stuff, hairs and everything else. It probably took 2-3 hours, first time. After that it didn't seem to get such difficult stuff on it.

Blow it first, then wash if you need to , then wipe damp, then dry. Then get the specs off.
The lightest of brushes (designed for the purpose) is good too but I worry about them getting dirt on them.
Static is a problem, working on it seems to build up more static.
I look at my sensor with a microscope now I have one, but your loupe should do fine. You have have to move it about to catch the reflection of a hair, etc, in the light.

Check the inside of your mirror box. I wind electrical tape round tweezers, tacky side out. Rolling it lightly round the inside's black felt stuff picks up trapped hairs etc.

Be thinking "grit" all the time though. Don't touch anything that's going onto the sensor, and blow wash wipe in that order.
I do have a tiny straight scratch on a sensor glass, I don't know when it arrived. I can see it under a scope but have to try very very hard to see it on an image.

To check on an an image, use yor smallest aperture, maybe on extension, so get an effective f/45 -f/60 or so (A hole in aluminum foil over a lens, will do). Point towards something bright and evenly lit (ceiling) when well out of focus. You can move the camera about - the dust won't move. Expose to a mid grey. You'll probably be horrified, but that's a tough test and you'll see what you're up against.

This is what I started with - after making things show up, in photoshop Curves. 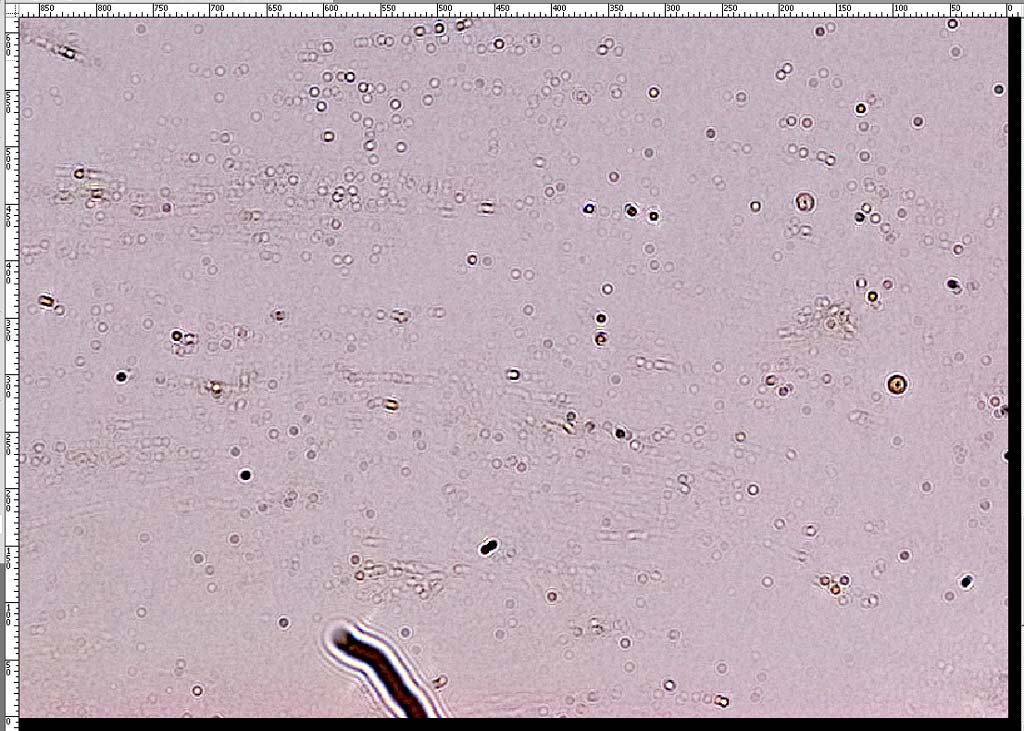 Thanks for the response and suggestions Chris, I ordered the pads and Eclipse to try. My test setup is a 4x Amscope on bellows for approximately 5x. I then do a stack of about 20 or so images in Zerene. Then examine the stack in PS at 100%. The specks show up great in PS but I cannot see them in the loupe no matter how long I look. The camera has less than 10k clicks and has never been used in very adverse conditions. Most of the shots have been inside my home or a tent. Most of my frustration is because I cannot see the dust with the loupe so must perform a test after each try at cleaning. Looking at the sensor with the loupe, it looks perfect. Thanks again. Ted
Top

When you said "Blow it first, then wash if you need to , then wipe damp, then dry".

What is the best way to "wash" and how is that "wash" different than "wipe damp"?

Sorry for my newbie question. I can search the forum myself, if I have more specific keywords.

I suspect just about everyone with a used camera with > 4000 clicks can use some sensor cleaning? I change lenses very often and that can let in much dust.
Selling my Canon FD 200mm F/2.8 lens
Top

It is difficult to have a perfectly clean sensor. Even after cleaning there is almost always some small dust or dead or hot pixels that will create a worm-trail.

A god practice is to take a gray card out of focus picture before or after your stack. I open al the pictures in Adobe LR or BR. I remove dust from the grey picture and uses it for white balancing. Then I copy this changes to the stack pictures before sawing and converting them from raw to JPG or TIFF.

I'm sure everyone has developed their own way.
What I mean is to get rid of anything potentially damaging in a non-damaging way. It's almost all by imagination though, as Ted says you don't actually see what's going on.

With the mess shown above, I'm imagining a glass surface with some grease on it, with hard particles in the grease. I want liquid on there to dissolve the grease and let the particles move, which is what I meant by "wash". I drop one drop onto the sensor then tease it about as lightly as possible with a tiny sable brush. With luck, the rocks find their way onto the fabric (Pecpad) I use to collect the liquid, then use a fresh piece. There always seem to be a couple of sticky particles at least. ROR is good for unsticking rocks.
Standard instructions tend to be to use a blower followed by a ridiculously expensive square of pad with one drop of miracle-working elixir, which you drag across the sensor. No thanks. Sticky particles just smear, and stuck rocks do damage. Oily dots need a dozen such pads.
So once I'm reasonably happy there's nothing aggressive on there, I'll go with the damp pad, but I always find there are smears and still tiny hairs or dust particles.
The Spec Grabber is wonderful for the biggest and the smallest "bits", with no sideways movement. Dab, then wipe the tip on a Eclipse (Or IPA / propanol/alcohol) dampened pad to clean it, then dab again. IPA (Industrial Propyl Alcohol) is cheap once you find somewhere to buy it (Maplins, in the UK).
I noticed spectacles cleaner is a water/alcohol mix, but with undesirable perfumes etc. a tiny dot of the liquid, on the Grabber, can be useful to tease something free. I have used Calotherm liquid, which is anti-static. It was always great for dusty negatives. It did the job, but I don't know what else it has in it, and didn't do a monitored trial.

You do need to SEE what you're doing. I have a couple of (hundred...) lenses to choose from, but 4 dioptre, £1-shop reading glasses over my normal specs, are pretty good. Something like one of these:(clicky) 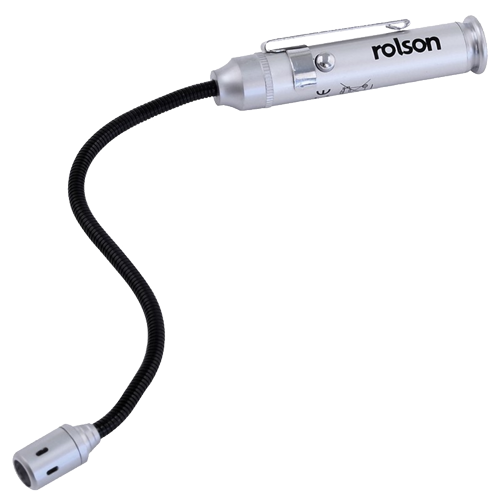 lets you move a light source about - you need reflections.

I fantasize about having a camera on its back in Live View, connected to a monster monitor, so I can work with tools and really see what I'm doing. But I haven't got that together.
A stereo microscope, is very good though - obviously you need one with sufficient working distance.

I've heard good reports of a liquid which you allow to harden on the glass, and then unpeel. I don't see it removing oily spots too well though. I've also heard of Sony sensors being particularly soft or having a soft coating on them. That sounds like trouble!
Chris R
Top

I'm struggling to understand why either magnification or aperture matter when it comes to a dirty sensor. Can someone please explain?
Top

Magnification - I'm guessing that Ted's effective aperture takes a nosedive smaller as he goes up.

Basically the darned "sensor" dust is in focus better at smaller EA's. Bearing in mind, that is, there's always a few (like 2-4) mm of glass against the sensor for the dust to settle on. It's not right against the sensor - if it were, you're right, aperture wouldn't matter.
Chris R
Top

This is before which I have circled when viewed at 100% in PS. Not sure if all will be obvious at the reduced size. Twenty image stacks used. 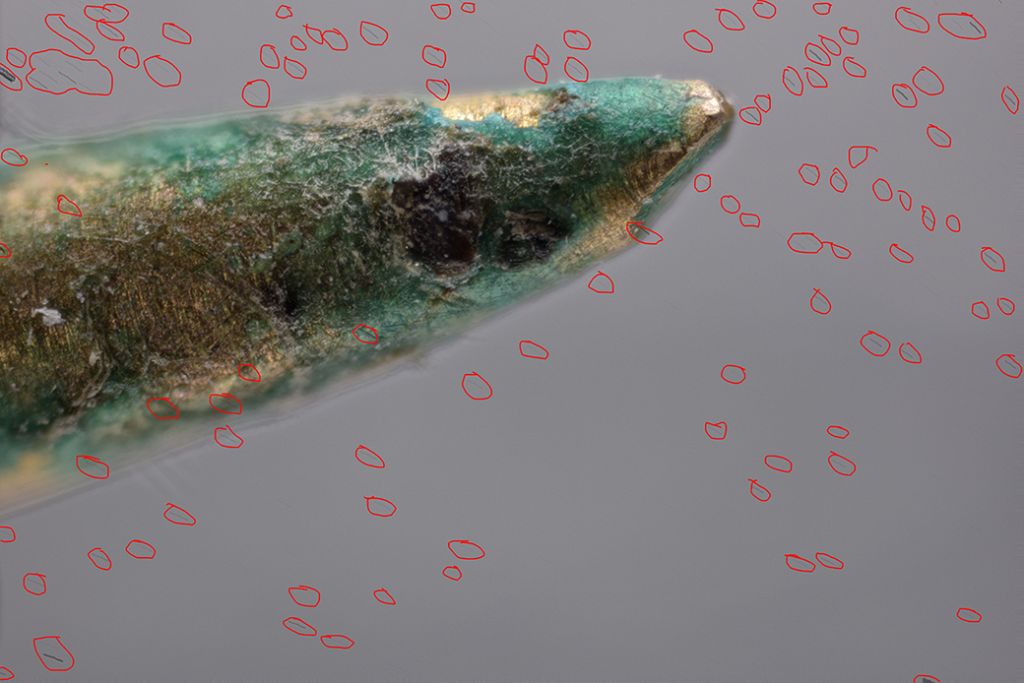 This is after cleaning with wet swab. 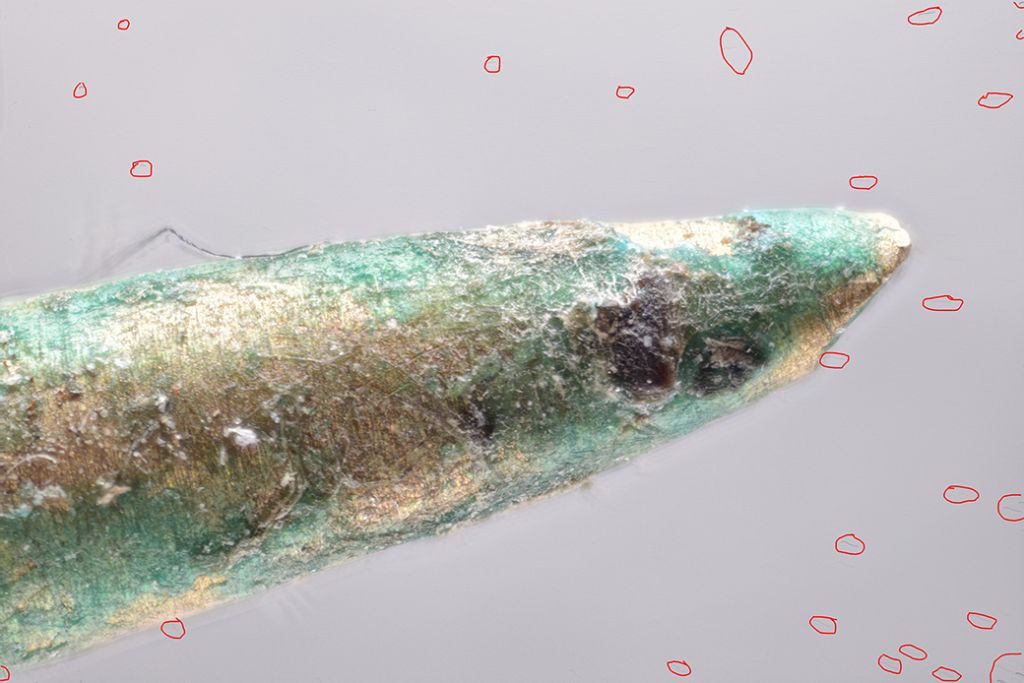 The object in the images is used for a different test at the same time. Did not think it would matter in the cleaning since a full sweep is being employed.
Top

What camera are you using? Do you shoot in RAW format?
Top

Nikon D800e. Normally, I always use RAW but for these tests in Zerene, I am using JPEG fine. TIFF files are so large that I did not think they were needed for the sensor dust test. My first notice of the dust problem was on a subject that I had shot with RAW and converted to TIFF in LR before stacking in Zerene.
Top

Nikon D800e. Normally, I always use RAW but for these tests in Zerene, I am using JPEG fine. TIFF files are so large that I did not think they were needed for the sensor dust test. My first notice of the dust problem was on a subject that I had shot with RAW and converted to TIFF in LR before stacking in Zerene.

I use the D800E as well, great camera IMO. You can create the TIFF files directly in the camera without the hassle of converting from RAW in LR. These in camera created TIFF files apparently have no loss of content vs. those created in LR from the RAW files.

I don't know about LR but in Photoshop you can choose the type of compression you want when saving a file as a tiff. If you choose "no compression" or LZW compression, there is no loss of information. LZW compression is lossless but the files are smaller. If you save with jpg compression then there is a loss.
Lou Jost
www.ecomingafoundation.wordpress.com
www.loujost.com
Top

IOW, is there any advantage to shooting in raw or tiff when uploading to PM?
Top
Post Reply Previous topicNext topic
25 posts