I'm not an early adopter, so when something new comes out I wait for reviews and such. So I've been waiting for confirmation that the D850 will work well for PM systems before pulling the trigger. I never did buy a D800 or D810 because of the uncertainty about MUP and double triggers and lack of pdk support, etc. Now I'm wanting to buy the D850 but need to make sure I can actually use it.

In the past I used Helicon Remote to capture stacks, but now I'm using the MJKZZ controller, so it's more like a Stackshot in triggering. I set up the stack, and make sure the Live View is showing on the camera screen (thanks to Rik's tip) and all is good. So my question is what can I expect from the D850 in such a system? Does it need any other tricks to make it work? Are there any caveats that I should know about before pulling the trigger on ordering?

Thanks in advance for this critical info.
Top

In general all seems well, with the qualification that there is no flash sync signal sent in "Silent Live View Photography" mode. (I just tried it for confirmation.) Perhaps another downside is sensor heating if you stay in LV for a long period. In any event, as Jim says, it's almost hard to know why they still have Mup mode on the camera.

If you want flash, you can use EFCS with delay in LV, but that cycles the mirror/shutter.

It's certainly a fine camera -- go for it.
Top

I use Delay Exposure with EFCS on the D850 as you mentioned. I still does cycle the mirror but you can use flash, which is what I use.

I've been thinking about how to trigger this D850 camera in live view and also use the flash, same as D500. The timer Steve mentioned should work and not cost much to build, but Saul has pointed to some eBay timers that might also work.

Here's my thinking out loud, Ok I know I'm opening myself to get ripped

This is a stacking senerio with say Stackshot or Wemacro stacking rail. The output is an open relay or FET drain for triggering the camera. With a "Y" connector from the stacking controller, one of the "Y" arms goes to the camera as usual, the other goes to trigger a negative edge triggered delay circuit. Since the Nikon camera provides a "pull up" voltage & impedance (I believe this is correct, please comment if you actually know), this can allow the delay trigger to work in parallel with the camera trigger. Thus both the camera and delay are triggered by the same signal from the controller. The camera is set to Delay Exposure mode, say 1 second, and the delay circuit is set to something slightly longer to trigger the flash. Now the flash uses a negative edge trigger as well, so use the NO relay output of the delay circuit to trigger the flash. Most flashes and strobes can be triggered from the synch cable port which is where to connect the delay circuit NO relay output with a flash synch cable.

If you are willing to work in the dark, then set the camera exposure time to some long time say 1/4~ 1/2 second and you should have no trouble placing the delayed flash trigger signal inside that exposure time window. If you use a normal shorter exposure, then the delay time will need to be carefully adjusted to put the flash trigger inside the exposure window. One caution here, the actual optical exposure time of speed lights and studio strobes can be quite a few milliseconds, so make sure you are not cutting off the flash exposure end or beginning.

I understand that some of the new studio strobes have a built in delay command (Adorama XPLOR 600, Radid 600), although I haven't tried using this yet. If this behaves as I suspect, then one could forgo the delay circuit and simply use the built in delay of the strobe by directly triggering the camera and strobe with the "Y" cable signal.

Multiple stobes or speed lights can be triggered by using the S1 mode to fire the flash when another is detected. Thus the "Master" strobe has the delay and fires the other "slaves' via S1 mode.

Ray, This is an amazing instrument, I haven't had much time to do much lately, but hopefully soon. I'm sure you won't be disappointed with the D850!!

Thanks Steve and Mike for the great info. I use continuous light so I am not worried about the flash sync issues at all. It sounds like the D850 can do what I want to do. It will be my first FF camera...Ray
Top

Hmm, went to order and realized I had not confirmed ability to tether and view on-screen in Live View. Is there a software solution available to do this? Or would I need to resort to a video feed?
Top

I use the HDMI output to a small 7" LCD screen, that works fine for what I need. Also has SnapBridge, but apparently that doesn't work well yet.
Top

Are you saying that SnapBridge v2 will allow me to view the Live View image and control camera settings on the D850? Is that verified?
Top

mawyatt wrote:... Nikon camera provides a "pull up" voltage & impedance (I believe this is correct, please comment if you actually know), this can allow the delay trigger to work in parallel with the camera trigger...

We have to be careful here - ebay timer delay relay has voltage on the "start " button contacts also. Why I used two extra relays to separate all signals ... Just in case ...
Saul
μ-stuff
Top

Also has SnapBridge, but apparently that doesn't work well yet.

Or in my case, "any more." I downloaded it yesterday and successfully connected the camera, but today no joy. HDMI is surely more reliable. And surely ControlMyNikon will eventually support the D850.
Top

Has anyone ever measured/seen the current flowing through the centre contact of a modern flash, or how long the output is "low" for?
Chris R
Top

Also has SnapBridge, but apparently that doesn't work well yet.

Or in my case, "any more." I downloaded it yesterday and successfully connected the camera, but today no joy. HDMI is surely more reliable. And surely ControlMyNikon will eventually support the D850.

I have asked CMN/Tetherscript folks about this and will let you guys know when I hear back from them.
Top

ChrisR wrote:Has anyone ever measured/seen the current flowing through the centre contact of a modern flash, or how long the output is "low" for?

I just made some very quick measurements of the Hot Shoe strobe/speedlight trigger. Here's what I found.

So it seems the camera can support theses voltages and currents. So the camera must have an open drain NMOS FET as the trigger output on the Hot Shoe. This pulls low to trigger whatever is connected to the Hot Shoe with a low near zero volt and things should trigger on the negative going edge of the voltage on the Hot Shoe. All this implies the device connecting to the Hot Shoe have a built-in "pull up resistor" of 10K or greater with a voltage of 6 volts or less. Of course the actual specs might be much higher in voltage and current, I recall somewhere than new DLSR Nikon can handle 24 volts (Canon 6V or less), and a few ma.

Thanks
Thoughts-
Some Optocouplers run at lower voltages and currents than those - tick
The usb socket on the camera could provide a safe voltage source which wouldn't mind someting under 100µA - tick
Or one could use a small battery box to house a local battery (which would last forever) with the few components and have the long lower impedance, coupler output lead going to the Ebay thing rather than one from a camera connection - tick.
HCPL4701, from 40µA, from 3V, $4.

We discussed using something like that for a Canon years ago, but didn't really need it - dimming the room + rear curtain, works. I have a 100x objective now so may need to extend it to several seconds, so maybe it's time to knock something together.
Chris R
Top

Here's a circuit that should work with just about any camera and strobe/speedlight. It uses your good idea of the USB power available, thus no batteries, nor extra power supply, nor tapping in to the controller power (usually 12v), so should be completely safe for the camera. Since it's camera USB powered you can probably eliminate the Camera USB ground wire. USB power supply ports can supply quite a few milliamps, plenty for an opto-coupler.

Just select resistor R for the Opto-coupler you use, probably 3.3K should work fine with the Stackshot and WeMacro controllers and most opto-couplers and with any of the cheap eBay delay circuits previously mentioned and I've seen.

With the Adoroma (Godox) strobes I mentioned earlier that have the built in delay flash, just connect the Opto-coupler directly to the strobe trigger input connector, eliminating the delay circuit all together.

Overall this circuit should allow Live View use with EFCS use without MUP engaged and strobes/speedlight flash. Setup would be use camera exposure delay and match the strobe or delay module to place the exposure window such that the optical flash occurs within the window. Using a longer camera "shutter" exposure will make it easier placing the optical flash within the exposure window for starters, once you've got a handle on the proper delay matching you can tighten up the camera exposure. 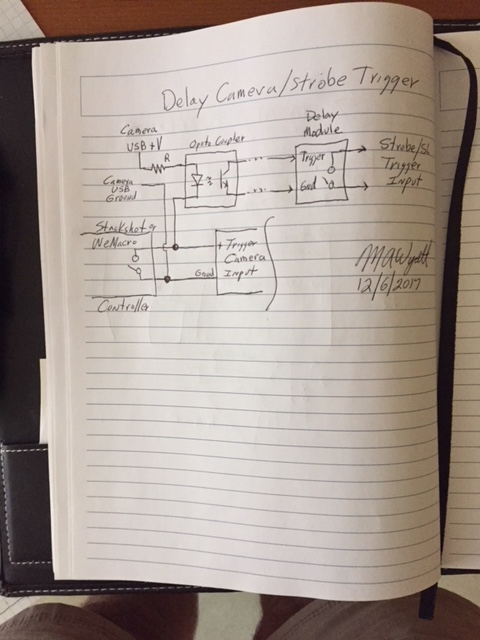