So, I bought this 50X long working distance metallurgical objective with marking like this PL L 50x 0.70 160/0 and it is coming. I mainly bought this for the purpose of measuring my slider system and because it is cheap (100USD) compared with Nikon, Olympus ones.

I was told that it is sharp, so anything else I should watch out for with this objective? If it is not useful for my measuring purpose, I can refuse delivery and just pay the shipping.

I will be curious to hear more, when you get this objective. NA 0.70 is quite large for a long working distance objective. The Mitutoyo M Plan Apo 50X and Nikon CF Plan 50X EPI ELWD are both only NA 0.55.

But in any case, if it has enough working distance then the objective will probably work fine for your measuring application. The image alignment process in Zerene Stacker integrates across the entire image, so it does not require great sharpness. At NA 0.70, your biggest problem may be getting the target focused. The nominal DOF is only 1.1 micron.

Looking at the catalogue picture of the series, the 40x NA 0.65 has a small enough front lens to indicate a very small working distance. WELL under 1mm I expect, which makes front lighting practically impossible

Thank you all. I got the objective but they sent the wrong one . . .

Rik, I do not know that 0.70 is unusual, else I probably stay away from it. But I asked them to send me one with PLL 40/0.6 160/0 marking on it. The reason is, besides unreasonable NA claim on the 50X, they told me that the 50X one has working distance of 2mm, the 40X one has 3.73mm working distance. I am new, so I need as long working distance as possible.

I could not access Bushman's link for the PDF

2mm is very difficult, 3.73mm is still quite difficult, but certainly possible.

I could open Bushman's link, but it doesn't give the WD figures. Where did you find them?

You will have to diffuse your light well. Side-lighting needs more diffusion, because the angle of incidence is restricted.

This is a clip from the old Nikon MPlan catalogue.
Fortunately, USED prces are a lot lower than these. 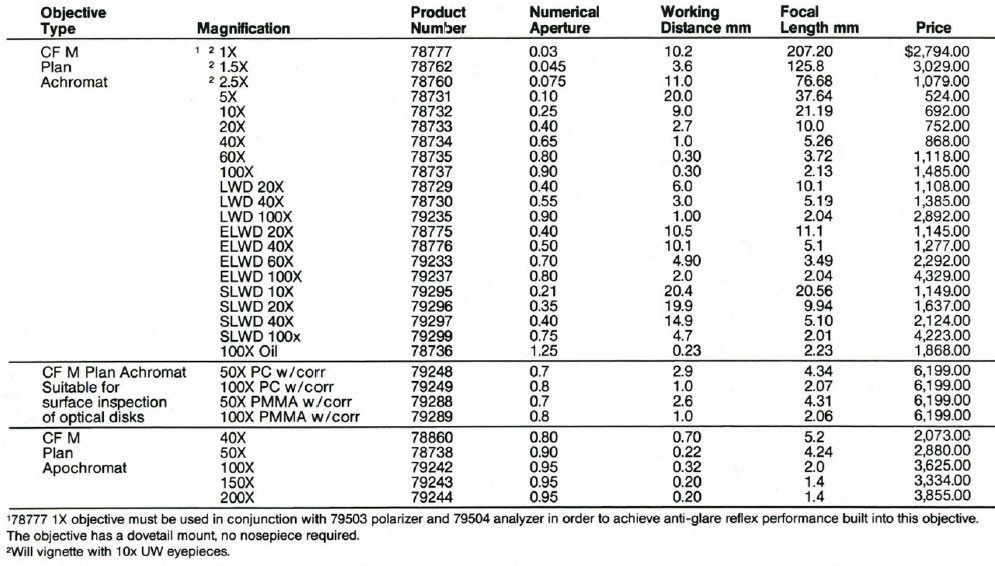 Thanks Chris, now I wish I could open that PDF because the vendor sent me the wrong objective and I can return it and get full refund.

But I will try to work with 3.73mm working distance objective. The vendor did promise me a refund but I have to pay for shipping.

it is an infinity one, can I use extension tubes with it or do I have to get a tube lens?

See HERE for illustration of what happens if you use a 50X NA 0.55 infinite on empty tubes, as if it were finite.

now I wish I could open that PDF because the vendor sent me the wrong objective and I can return it and get full refund.

Is that CAN or CANNOT? If he sent the wrong one, presumably you CAN return it?

As I said, the PDF that shows the lens you "bought" gives no useful detail about WD.

The Nikon 50x LU you've found will be expensive new!

Chris, regarding refund, yes I meant I CAN return it and get FULL refund, not even paying for shipping. But because I did/could not open that PDF, not knowing there are objectives with longer WD, I have accepted a delivery of 40X with WD=3.73 (it is not Nikon). I still CAN return this within 7 days but I have to pay for the shipping.

The Nikon Objective that I am watching is a used one, good condition,no scratches on front and back glasses. Outside looks OK, too. It costs 600USD + shipping.

But for now, I will work with the 40X WD=3.73 objective coming to me tomorrow.
Top

I have no trouble opening Bushman's pdf.


mjkzz wrote:I am new, so I need as long working distance as possible.

New or not, we all benefit from decent working distance, for macro work!

As a rule of thumb, I'd suggest staying at about 10mm or above, unless the NA you require gives you no choice. (NA is generally more important than magnification power--NA gates how much resolution you get, while magnification just indicates how much you spread this resolution out on your sensor.) At higher NA's, there is no choice but to sacrifice working distance--though some expensive optics sacrifice less than cheaper ones.

I'd suggest you stick with objectives that are known and widely used by members of our community, at least in the beginning. Once everything else is working for you, go ahead and try unknown glass if you want. What you'll likely find is that most of the time, the results will be disappointing. At the beginning, there is way too much to learn to add disappointing glass to the mix.

One tried and true objective that is finite--therefore for use on a bellows, not a converging lens (tube lens)--is the Nikon M Plan 40x/0.50 ELWD, which has 10.1mm of working distance. This makes it much, much easier to work with than something with 3.73mm WD. Good specimens of this optic are very sharp. But as it's not an apochromat, you will see some purple fringing in areas of high contrast. (Though much of this disappears when stacking, with many subjects.) These objectives are often available second-hand on eBay at decent prices.

The modern Nikon 50x LU you mentioned probably behaves similarly, but as Rik said, should be used on a converging lens, and as ChrisR said, likely costs much more.

Thanks Chris, I got the objective, with two little flashes (similar to Canon 270E), the 3.73 WD is manageable. I actually have to reduce power level to 1/128 on the two flashes.

Now, I am trying to replicate what Rik did using ZS to measure small displacements. So far, not very successful, I think vibration is the culpit. But I am working on it. Report results and how I did it back soon.
Top

Small displacements are hard to work with. I usually have trouble too.

One way to think about it is that the measurements are difficult to make.

But I think a more accurate model is that the measurements are actually simple to make, and what they show is that the whole setup is moving around in ways I didn't anticipate, and by amounts that are far larger than I anticipated.

There is much value, I think, in the exercise of getting everything stabilized and controlled so that the intended small movements don't get lost in the unintended larger ones.

Thanks Rik. The objective is very sharp (well, I have not used one before, so there are some grains of salt

), the surface of my shiny stainless steel micro stage is not so smooth under it

The source of vibration is my extension tubes, too much gap between each segments, they are not as rigid for micron, let alone submicron level work.

I am driving a Mitsumi XEG60 dovetail micro translation stage with 0.9 degree stepper, the coupler is as smooth as turning the knob, so mechanical performance of the stage should be very good, but my result is all over the place. So I shine a very strong flashlight on the subject so that I can view it on screen, when I put my finger on the extension tube, the image shifts by large amount.

One trick I learned is that I can use the built-in flash to trigger two external flashes (set in S1 mode, optical trigger) even when mirror is up with my Canon 550D 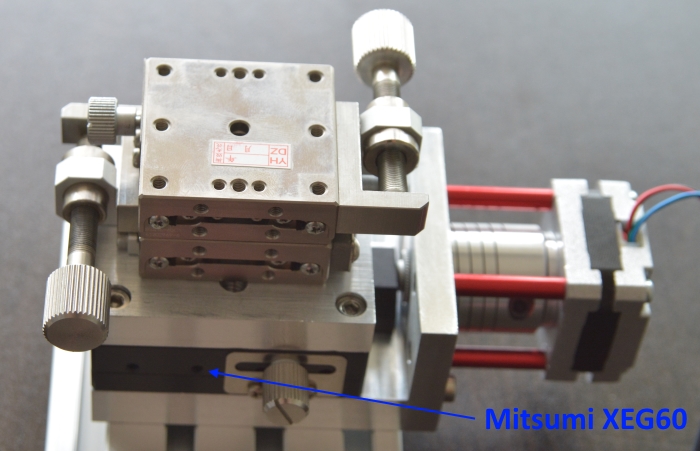 mjkzz wrote:when I put my finger on the extension tube, the image shifts by large amount.

I sympathize, and I'm not surprised. Quoting a snippet from my description at http://www.photomacrography.net/forum/v ... 928#171928:

mjkzz wrote:One trick I learned is that I can use the built-in flash to trigger two external flashes (set in S1 mode, optical trigger) even when mirror is up with my Canon 550D

That's true. However, you're still getting vibration from mechanical shutter opening, just before the internal flash goes off and triggers the external flashes. If you've read a little about EFSC (Electronic First Shutter Curtain), then you might imagine that putting the camera in Live View mode would eliminate that vibration. But that doesn't actually work. What happens then is that the camera realizes it has to drop out of Live View / EFSC mode because the internal flash is active, so when you trigger the exposure, the camera closes the shutter, drops the mirror, raises the mirror again, opens the shutter, and then triggers the flash. This all takes so little time that it's not evident what's happening, but there is a substantial amount of vibration involved.

With the 550D, your best bets for reducing vibration are to either 1) shoot with continuous illumination, from Live View mode, thus using EFSC, or 2) shoot from mirror lockup, in a darkened room, with a fairly long shutter time like 2 seconds, with second-curtain sync. I don't know whether the 550D can do second-curtain sync with the internal flash. It might require an external flash like the 580EX II.

About the extension tubes, if you're concerned about movement between the tubes, you might tack those together with some gel superglue to prevent movement. However, in the sub-micron range it's typical for flex to be a problem even if all the joints are solid.