Hi. I have recently won a bid on a Nikon PB-6 (haven't taken receipt of it yet) bellows and am looking forward to getting my setup together sometime in the new year. I intend to connect the bellows to my 'S' series Nikon microscope combined with a enlarger stand to support the camera (Nikon D300S) and bellows arrangement also to enable precise changes in focus point for photo stacking. I will purchase a remote shutter release also. What is recommended for objectives that will give good DOF so as to minimise the number of shots required and what is the approximate digital resolution required to enable good results without having lots of extremely big files. I noticed in the guidlines for Zerene a image produced from, I think a 157 stack project? I definately do not have a super computer however it does have reasonable memory plus I would probably save to hard drives the way I do for my other photographic interest (car shows). I appreciate any help I can get as I am very new to this type of photography. Cheers George.
PS: I also have both a film lens, SP Tamron and a Digital SP TAmron macro. Is it a good idear to incorporate either of these into the bellows arrangement then use low power objectives in the microscope nose. By the way, my SP Tamron 90mm f1.9 (iI think) was rated by Choice Magazine as the best in the running at the time of production. I bought it in the 1980's it competed favourably against Nikon, Canon and Pentax at the time.
Top

George, in case you're wondering, I moved this post into Equipment because it was misplaced in the image galleries.

I'm not familiar with the 'S' series Nikon microscope, but from description at microscopyu I see that it's an older model intended for use with finite objectives. In that case a good approach is to use "direct projection" where there are no optics other than the microscope objective. I presume it has standard RMS threads and a 45 mm parfocal distance (from shoulder of mounting threads to focus point on a slide).

Assuming all that is correct, then you have several reasonable choices for objectives.

In new manufacture parts, Edmund Optics stocks a line of Nikon Achromatic Finite Conjugate Objectives HERE. I have tested (and still own) the 10X one, which works very well even pushed down to about 7X by using less extension. See the report HERE. The 4X would also be worth trying out. Higher powers in this line are useless for reflected-light work due to lack of working distance.

In used parts, another good lens is Nikon's CF N Plan Achromat 10X NA 0.30. It's a little sharper at 10X than the 10X mentioned above, but it doesn't cover as wide a field so you can't push it to lower magnifications.

You asked about "good DOF", but it turns out you don't really have much flexibility in that area. At fixed magnification, DOF depends on NA, and there just isn't much range in the objectives you can choose between. At 10X, you'll have trouble finding anything below NA 0.25, and if you can, it won't be as sharp. You'll have trouble using anything above NA 0.30 because of limited working distance. The difference in DOF between NA 0.25 and 0.30 is only about 20%.

To get a quick estimate of processing time, I just now reprocessed the stack, using the PMax method, with the image pre-sizing option set to resize images on the fly to 50% (1536 x 1024 pixels). The computer was a 2-1/2 year old Dell Vostro 400 with a single quad-core processor running at 2.4 GHz. Processing time was 5 minutes and 14 seconds.

Here you see a very important tradeoff that many people don't think about: pick the resolution to match the task. It makes sense to shoot at full camera resolution, because you only want to shoot once. But processing at full resolution only makes sense if you plan to do a lot of retouching or to make big prints, and then only after you've previewed at lower resolution to check whether the stack came out good anyway.

What speed and size is your computer, anyway?

PS. Here is an actual-pixels crop from that ZS run I mentioned, no post-processing other than levels adjustment and a bit of sharpening, crop and put on a border. Writing this posting took a lot longer than the stacking and Photoshopping combined. 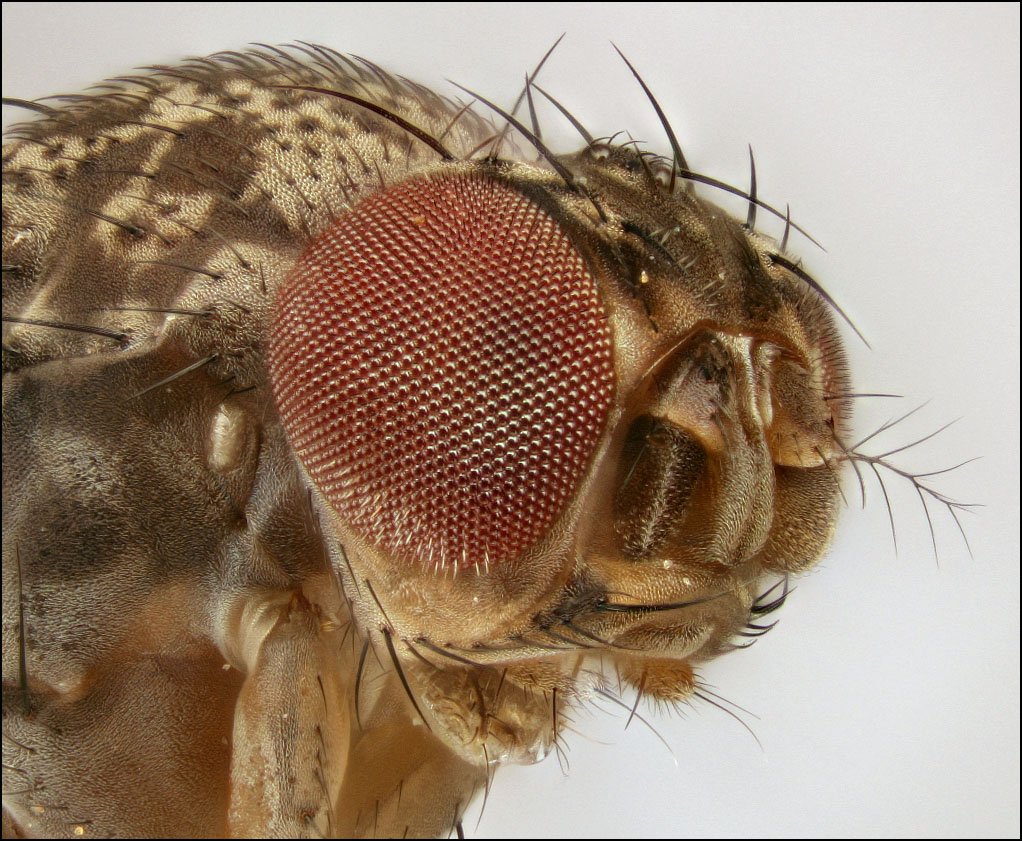 Hi Rik. Thanks for all the great information. I will definately investigate the Edmund's objectives. I did not mention that what came with the S series microscope is 1) Po 4 0.1, 2) Po 10 0.25, 3) Po 40 0.65/0.17 ?
Are these objectives suitable (I presume the 40 is not). From what you mentioned re "less extension"-does that mean in a system using only the objective, reducing the tube length reduces the magnification ie mounting the camera as close to the turret as possible providing the most suitable objective has been selected for the magnification wanted, hence, that an inverse sqaure relationship ie magnification increase as a function of extension exists as it does with other photographic optics?

By the way, I am not sure what the specs are on my computer-I could find out however I know it is reasonably powerful and fast as it is a relatively new DELL-about a year old. My camera is about a 12+ megapixel however I can easily lower the resolution to around the 6 megapixel to equal the resolution that you indicated as being sufficient. Cheers George.
Top

Unless you have problems with storage, it nearly always make sense to shoot in as high a resolution as possible. ZS lets you resize the source images on the fly to cut down processing time. That way if you ever make a stupendous image you want to print and hang on your wall, you always have th eoption to go back to your originals and make a full size stack.
rgds, Andrew

Hi again Rik.
I think I have answered my own question re the increase in magnification as a function of len's extension. The answer is yes. From the information you have provided re only using the objective and making the appropriate choice of objective it seems that this microscope is ideal as it has more stage travel up and down than other microscopes I have used and it is extremely robust so that the stacking images can be taken by moving only the stage and if I rig the camera to be very close to the turret for larger subjects there is minimal chance of movement with the exception of the shutter action. Do you agree?
Top

George, this might be useful:
Nikon S-Kt microscope manual
The list of compatible objectives towards the back might be examined by those more knowledgeable than myself to see if they correspond (in NA and WD) to the Nikon CF series, or to earlier non CF ones.

This is apparently one of the Nikon S series

Hi Jay.
Thanks for that. What a great at manual. Heaps of helpful information. I will study it a bit later today when time permits. I have saved it so as to produce a hard copy. I am old fashioned in that respect.

georgetsmurf wrote:...it seems that this microscope is ideal as it has more stage travel up and down than other microscopes I have used and it is extremely robust so that the stacking images can be taken by moving only the stage and if I rig the camera to be very close to the turret for larger subjects there is minimal chance of movement with the exception of the shutter action. Do you agree?

This all sounds reasonable. If you illuminate with flash then movement will be no problem anyway. If you use continuous illumination, movement caused by shutter action may be a problem. In that case, there are several different approaches to mitigate it. We can discuss those later if need be.

This all sounds reasonable. If you illuminate with flash then movement will be no problem anyway. If you use continuous illumination, movement caused by shutter action may be a problem. In that case, there are several different approaches to mitigate it. We can discuss those later if need be.

Way back in 1986 I wrote and published an article on macro-flash photography giving the calculations required for flash power settings at specific apertures so as not to have to compromise on depth of field the way most articles did. The article plus images was in the then leading monthly Australian photography magazine 'Photoworld' Vol.9 No.10 (I also had the front page photo pulished). This was in the days when macro flash photgraphy was a lot more difficult than it is today. The interesting thing was that the magazine left out a square-root sign and out of a 20,000 circulation only one person sent in a letter saying the method didn't seem to work? The method I developed is probably still relevant today for photomicroscopy work where the only lens is the microscope objective.
Top

georgetsmurf wrote:The interesting thing was that the magazine left out a square-root sign and out of a 20,000 circulation only one person sent in a letter saying the method didn't seem to work?

I wish I could say I'm surprised. But to receive such a letter, you had to find a person who read the article, used the formula, got a bad result, decided the formula might be wrong instead of just their application of it, and cared enough to write. 1 in 20,000 is pretty believable.


The method I developed is probably still relevant today for photomicroscopy work where the only lens is the microscope objective.

Well, it's unlikely the physics have changed. What has changed is the need to predict rather than measure. Since the digital revolution, the usual way of setting flash exposure is either a) set dial to auto flash power with exposure correction if needed, or b) set manual exposure, testfire, check histogram, adjust and repeat as needed. Much as I love calculations, I have to say that I don't use them very much with flash except maybe to figure out how long a set of batteries might last at some specified power level.

You might be amused by a test I ran shortly after I received my 580 EX II flash unit and just now repeated. I screwed together a 10X infinity objective on 200 mm telephoto and pointed it at a test subject. Then I set the flash on ETTL. First I dialed it to narrow angle, pointed it right at the subject from 4 inches away, took a picture and got a nice exposure from a little flash. Then I backed off a couple of feet, did it again, and got a nice exposure from a brighter flash. Dialed the flash to wideangle, same thing. Bounced it off a white panel a couple of feet away, same thing. Added a diffuser on the flash head, same thing. Finally in desperation to make the thing fail, I turned the flash around and pointed at the ceiling. That finally did the job -- the flash was no longer powerful enough to give a full exposure, just a dimmer one. But for everything below that, it worked just fine, no settings required. Truly a fascinating experience.